A source in the area on Wednesday said that the building on Monday collapsed for the second time. 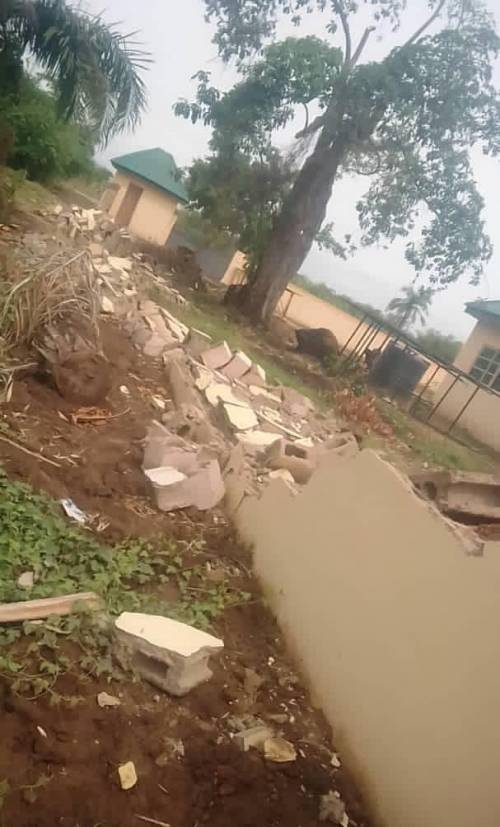 It has been reported that a new office of the Independent National Electoral Commission (INEC) which was being constructed at Onyedega, the Ibaji Local Government Area headquarters in Kogi State has collapsed for the second time within three months.

According to SaharaReporters, INEC started erecting the building in December 2021 after SaharaReporters reported how the electoral body abandoned voters’ cards and other sensitive materials in its dilapidated office in Onyedega.

A source in the area on Wednesday said that the building on Monday collapsed for the second time.

“The fence of the newly built Ibaji INEC office by the federal government (fence) has collapsed the second time. Inside the building, there are already cracks, looking old as if the building was abandoned for years,” he said.

“The first fence that collapsed was rebuilt, just little rain that fell two days ago in Ibaji; the fence collapsed again.”

It was learnt that one of the groups in the community, the Ibaji Progressive Youth Foundation was making plans to write a letter to the INEC chairman not to accept the building until the engineer or contractors put everything in other.

SaharaReporters had reported that the INEC's office in Onyedega, the headquarters of the Ibaji LGA was abandoned and overgrown with weeds due to a flood incident.

SaharaReporters had learnt that the INEC Onyedega office in Ibaji LGA was last used for the election of a former state governor, Ibrahim Idris, between 2003 and 2007.

Residents had told SaharaReporters during a visit to the creaky, bushy INEC structure that instead of the commission to rebuild the office after the flood, the authorities abandoned it and opted for a rented private building in a neighbouring area – a situation which made the people smell a rat.

SaharaReporters had observed that election materials and people's old voter cards were abandoned inside the building and were already rotting away during the visit.

A resident, Johnson Ajogwu, had said although the voter cards and election materials might be out of use, it was wrong for INEC to abandon them in the structure and start using a private facility.

“The INEC office was flooded around 2011 and 2012, and that was it. The commission left the LGA headquarters and moved to a private apartment in a neighbouring area. They did not clear the building. They even abandoned election materials and people's voter cards in the structure,” he had said.