He made the declaration at Kwale, headquarters of Ndokwa West Local Government Area of the state. 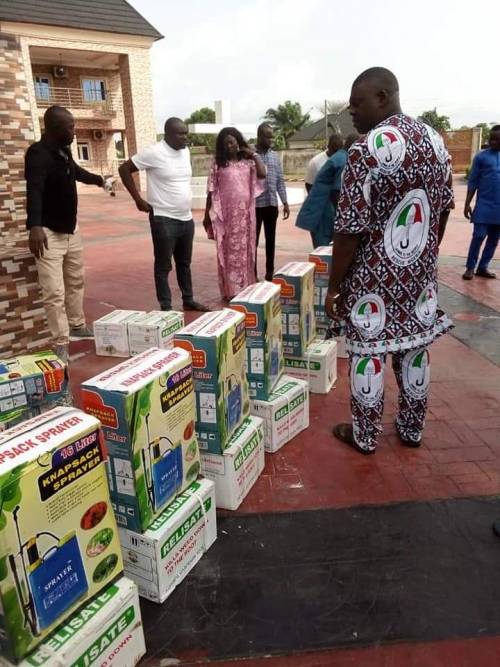 Ossai Nicholas Ossai, the member representing Ndokwa Federal Constituency of Delta State in the House of Representatives, has said that his recent distribution of pesticides and sprayers, which attracted criticism, was not a potential employment or job empowerment to his constituents.

He noted that it was not also an incentive for candidate nomination.

The federal lawmaker, who is seeking re-election, had faced criticism for empowering constituents believed to be Peoples Democratic Party delegates in the forthcoming primaries with pesticides and sprayers shortly after his declaration last weekend.

He made the declaration at Kwale, headquarters of Ndokwa West Local Government Area of the state.

Reacting to the criticism through a press statement, he described the criticism as a “familiar political gimmick” and the handiwork of “political jobbers” who may be intimidated and troubled following the growing of the political profile of the federal lawmaker.

He said, "The Ndokwa representative, Rt. Hon Ossai Nicholas Ossai did not distribute the said items for potential employment/job empowerment to constituents nor delegates as an incentive for candidate nomination, as being widely reported, NO! Rather the items were distributed through the resident representatives in response to the needs assessment report of rural farmers that prioritised the need for the provision of agricultural tools for their crop protection.

“The assessment report had revealed that farmers over time have been helpless to the uninvited activities of harmful pests and rodents, and thus, needed pesticides and sprayers to keep harmful pests away from their crops and to protect the plants from weeds and diseases that can greatly reduce crop desired yield and output.

"No matter the colouration the political propagandists may choose to give the distribution of the agricultural tools, the fact remains that the needs of a specific group of people differ at every point in time. As a farmer himself and agricultural economist, the Ndokwa Representative understands farmers’ war against pests, the cost of outsourcing it, the need for food security, and the fulfillment that comes from a good yield after hard labor. It is therefore strange to observe the unwarranted hullaballoo and carnivorous like attacks that greeted a sincere effort at supporting peasant farmers through the resident representatives who were in dire need of a combat tool against dangerous pests and rodents reducing their yield expectations year in year out.

"Hon Ossai is a change-maker and a transformational leader in all ramifications. As Chairman of the House Committee on Ethics and Privileges in the 8th Assembly, in representation or what may be preferred to include constituency services by some exegete of modern legislative studies.”