The man tells how his three children, aged 12, six and two, were kidnapped and later regained freedom after going missing for 12 days. 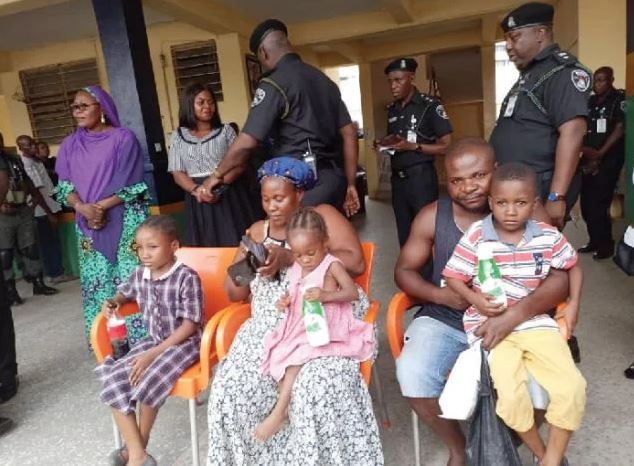 Sunday Ani, an Abuja-based businessman, narrates how his three children, aged 12, six and two, were kidnapped and later regained freedom after going missing for 12 days, in this Interview with SOLOMON ODENIYI.

How do you feel seeing your children again after going missing for nearly two weeks?

I am very happy that the children are back home. We went through a lot during their absence. Everywhere was very quiet. We could barely sleep or eat. All the time, I was thinking: ‘Where do I start my life from?’ Their mother was always feeling bad. But now the house has come alive again. My children are happy, my mother-in-law and everybody is happy for us. We thank God, the police and everyone who stood with us during the period that our children were missing.

Have your children been able to tell you what happened?

Yes, they told me what happened and how they were taken from their school.

What did they say?

After collecting them from the police station and taking them to the hospital, on getting home I asked Marvelous (the oldest) what happened. She said at the school closing time, she was supposed to have a lesson but their teacher said there was no lesson. So, she and her siblings boarded a motorcycle to come home. She said one woman stopped their motorcycle and told them their mother and father had travelled and the mother sent her to bring them. The woman told my children she would pay the commercial motorcyclist and instructed him on the route to take. The motorcyclist carried both the lady and my children on the okada (motorcycle) to a neighbouring village called Gouduyi from there.  My daughter said from there they entered Keke NAPEP (tricycle) and alighted at a place she could not describe. She said they gave them food and bathed them in that place.

Were they the only ones there?

No; according to her, there were other children there too.  She also said one pastor was always coming to pray for them in that place.

Did she tell you how they were freed?

She said the woman who took them to the place came on Sunday and told them that they should stand up and follow her. She complained that the problem (on their case) was too much for her and she could not continue to endure it and she had decided to return them.

How did they eventually get home?

The following morning, Monday, a call came through on my phone; I picked the call and was hearing noises, as if the caller was in a church. The caller, a female, asked if I was the father of the children – she mentioned their names – and I said yes. She asked me to come to the Wuye Police Station to pick up my children. On getting to the station, I saw my children hale and hearty. I was excited!

We entered into the DPO’s office. They told me how they found them (my children). He said when the children were asked who they were waiting for, they said they were waiting for their aunty. It was from them there a police officer took them to the police station. The police asked the children for my phone number but they said they couldn’t remember. But in the morning, around 4am, she (the eldest) walked straight to the police officer and told her she had remembered my phone number.  She called the number out to the officer. So, that was how they called me.

I am very happy that nothing bad happened to them. This thing that happened to me, it happened to some people and they never got back their kids back. It’s not my power, I appreciate God for wiping away my tears; I wouldn’t have known how to go about this. It (the experience) was like someone seizing your two legs; how would you gain balance? All that was running through my head then was: ‘Where am I going to start from? Would I impregnate my wife again after we have stopped childbearing?’

What lessons have you taken from this incident?

This is a serious lesson for every one of us, not just me. Let every family be careful about their children. They should create time for them. Parents should take them to school and warn the school not to release their children to anybody or there should be a concrete agreement in case the parents will be sending someone to pick the children from school. And there must be a phone call before the children are released.

Have your children exhibited any strange behaviour since their return?

Not at all. They have been fine and good. We have been together as a family; we are enjoying ourselves now. This early morning, the baby of the house woke up and did something that she usually does. She sang the national anthem. I joined them too in playing.

What do you think can be done to end the menace of children kidnapping?

I want to appeal to the police to do more. Most of these things that are being carried out by people within (the community). If it continues like this, they will start going from door to door, stealing and kidnapping children.  Everybody should be on alert. If you see a man or lady with a child that you’re suspecting, please report to the police.