Police Arrest Man While Robbing At Gunpoint In Ogun 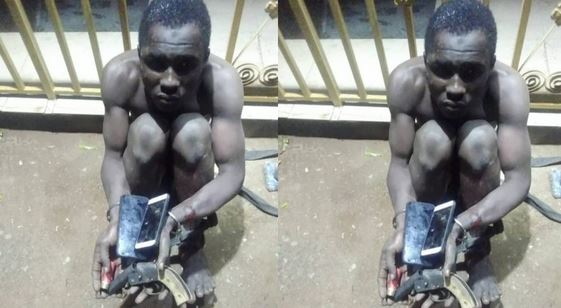 Operatives of the Ogun State police command have arrested a man identified as Isikilu Moses while he was allegedly carrying out a robbery operation at Joju, Ado-Odo/Ota Local Government Area of the State.

Moses was nabbed in the early hours of Friday, April 8, 2022, following a distress call received by policemen at Sango divisional headquarters.

The police had information that armed robbers had invaded Adebeshin street, off Joju road, Sango-Ota, and dispossessing members of the community of their belongings at gun point.

Ogun police image maker, Abimbola Oyeyemi, said on Sunday that the DPO of Sango division, SP Saleh Dahiru, acting on the information, had immediately mobilised his patrol team to the scene.

Sighting the policemen, Oyeyemi informed that “the hoodlums took to their heels, but they were hotly chased,” adding that only Moses was apprehended.

He disclosed that one locally-made pistol, and two mobile phones, said to belong to victims, were recovered from the suspect.

The police spokesperson disclosed that the Commissioner of Police, Lanre Bankole, has directed that the suspect be transferred to the state CIID, while ordering that fleeing members of the gang should be fished out and brought to book.