The petition, signed by the National Chairman of the group, Amb. Belusochukwu M. Enwere, comes on the trail of reports that the singer died in the hospital after suffering from domestic violence from her husband. 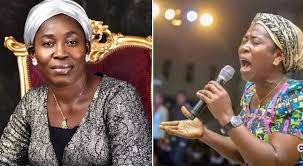 The Inspector-General of Police, Usman Baba has been petitioned by the Christian Association of Nigeria over the death of late gospel singer, Osinachi Nwachukwu.
The Youth Wing of the Christian Association of Nigeria (YOWICAN) tasked Baba to investigate the death of the singer.
The petition, signed by the National Chairman of the group, Amb. Belusochukwu M. Enwere, comes on the trail of reports that the singer died in the hospital after suffering from domestic violence from her husband.
Osinachi’s sister, who is the first daughter of the family and was identified as Favor Made, said on Sunday that Osinachi died as a result of a cluster of blood in the chest.
She said the late suffered from a blood clot after kicks she received from her husband, Peter Nwachukwu.
“We heard it was cancer that killed Osinachi. She did not die of cancer. The husband, Mr Peter Nwachukwu hit her with his leg on the chest. All this while, he has been beating her but my sister hides all that she was passing through from us,” she had said.
SaharaReporters had reported that Osinachi’s death was announced on Friday night.
The YOWICAN petition reads, “We humbly write on behalf of YOWICAN, the umbrella body that coordinates and oversees the affairs of all the Christian Youths in Nigeria, over the sudden death of Mrs Osinachi Nwachukwu.
“Prior to her demise, the deceased was a gospel minister, a singer and an artist. She was a devoted Christian and worshipped at Dunamis International Church, Airport Road, Lugbe, Abuja and was 42 years old as at the time of her death.
“The deceased Osinachi Nwachukwu was married to Mr Peter Nwachukwu (the prime suspect) who also doubles as her manager, and with whom she had four children, all minors.
“Information reaching us from a reliable source including friends and close family members has it that Mrs Osinachi Nwachukwu died as a result of injuries owing to domestic violence in the hands of her said husband, Mr Peter Nwachukwu.
“We as well gathered that the acts of domestic violence have persisted unabated and have been largely kept away from the Christian fold and the general public before this unfortunate episode that led to her death, owing to the severe injuries she sustained, which mostly affected her vital organs.
“Our prayers: It is in the light of the foregoing that we as leaders and representatives of the Christian youth body, to which Minister Osinachi Nwachukwu is a dedicated member, hereby petition that you use your good offices to cause an in-depth investigation into the circumstances surrounding the unfortunate death of this renowned music evangelist in order to ensure justice for Late Minister Osinachi Nwachukwu, especially the purported role played by her husband that led to her death in order to ensure that she gets justice, while bringing the perpetrators to book. Thank you Sir, in anticipation of a speedy investigation.”
Top Stories