The contract was awarded by Ganduje to Stonegate Quaries Limited, in 2019 which is now abandoned. 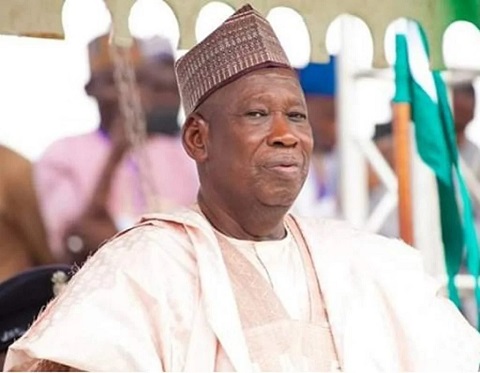 A new report has alleged that Kano State Governor, Abdullahi Umar Ganduje awarded contract worth millions of naira to a company that doesn't exist.
According to PR Nigeria, Ganduje awarded a road project to the tune of N110 million to a non-existent construction firm.
The contract was awarded by Ganduje to Stonegate Quaries Limited, in 2019 which is now abandoned.
According to Economic Confidential, the state government officials have also, after repeated questioning, been unable to account for the total of 110 million Naira that has been approved for the road which remains abandoned and in a state of disrepair.
“The Ado Bayero Road Network project at Dorayi Babba in Gwale LGA was first awarded in 2019 by the State Executive Council chaired by Governor Ganduje and a total sum of 110 million Naira has been approved for it across 2019, 2020 and 2021 budgets.
“The sum of 38 million Naira was approved for the project in 2019 and other approvals came in subsequent years but according to findings by Economic Confidential, the project has been abandoned with no sign of work going on.
“STONEGATE QUARIES LIMITED, the construction company which had the contract awarded in its favour is unlicensed, unregistered and untraceable, ECONOMIC CONFIDENTIAL can authoritatively report.
“Based on the measurement of a certified surveyor and testimonies by residents of the community, the abandoned project is just a 1-kilometre road.
“STONEGATE QUARIES LTD, whose address was given as 1011 Domkat Bali LN. Mabushi District, Abuja, is the name of the construction company said to have gotten the contract. This is according to the metal board square fixed at the project location that carries details about the project, client, contractor and the supervision of the project.
“According to the feedback obtained from the Corporate Affairs Commission (CAC), however, the company does not exist in law as it is not registered.
Despite the approval of 110 million Naira since 2019, it was gathered, through a community forum, that the residents of the area have in recent years raised more than 14 million Naira and spent on the road just to make it a bit passable for themselves.
When contacted by Economic Confidential over the project, the Kano State Commissioner for Works, Engr. Idris Wada Saleh, simply replied that: “Who told you he is not qualified and what is your problem with that? Is the work not done properly or he doesn’t pay his taxes.”
Top Stories