The church and traditional wedding ceremonies were scheduled to hold on Saturday, April 16, 2022, in Amenu Uburu, Ebonyi State. 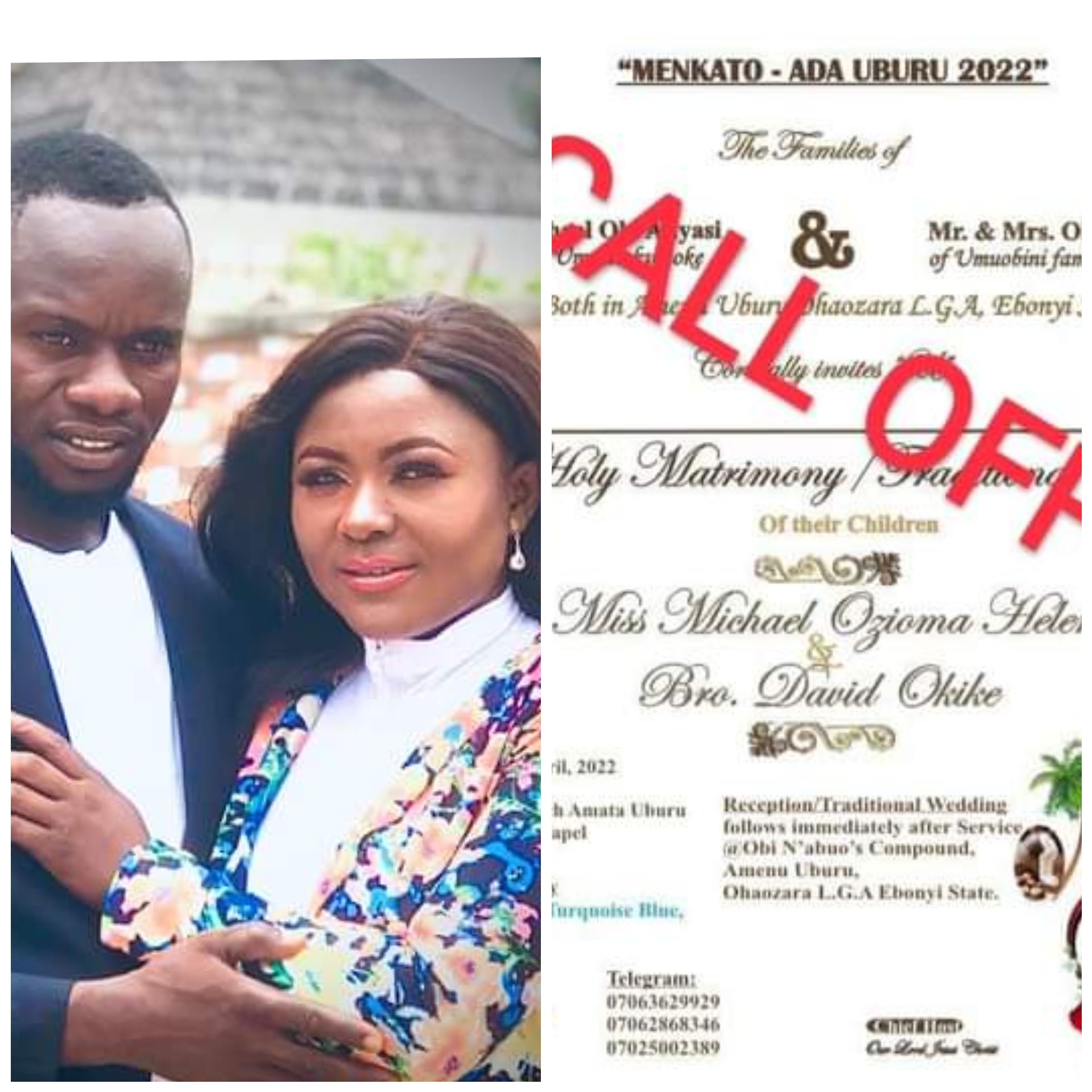 A Nigerian lady has decided to call off plans for her wedding.
Ozioma Helen Michael (Ada Uburu) called off her wedding over domestic abuse.
The church and traditional wedding ceremonies were scheduled to hold on Saturday, April 16, 2022, in Amenu Uburu, Ebonyi State.
In a post shared on her Facebook page on Wednesday, April 13, Ozioma said she cancelled the wedding because her fiancé, David Okike, has allegedly been beating her and even threatened to kill her.
Ozioma alleged that he started maltreating her soon after paying her bride price, adding that she has been enduring the toxic relationship for over a year hoping he would change.
She also apologised to her friends and family for any inconvenience the cancellation may have caused them. 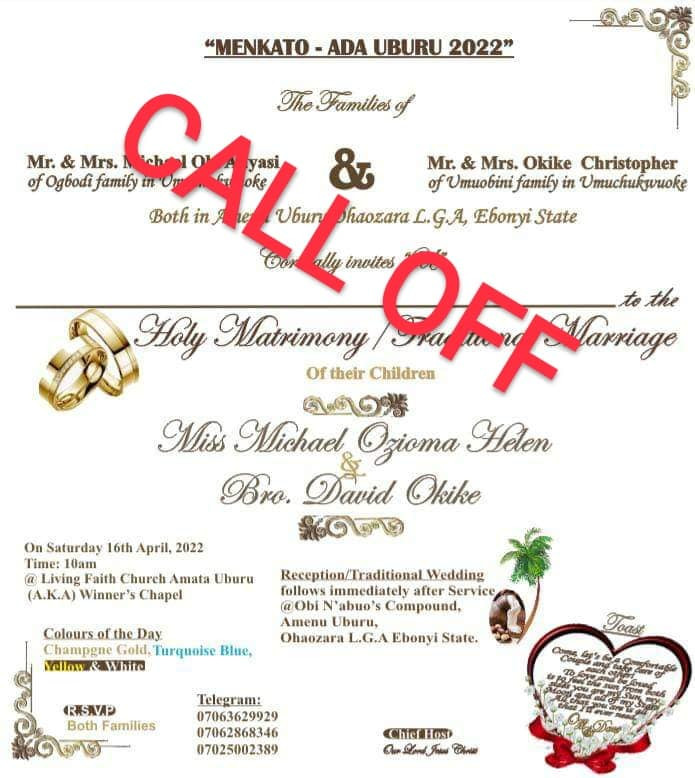 Read below:
Hello Guys!!! I never wanted to bring this here but I have to, I am a type of person who likes to keep my relationship away from social media but this is for clarification purposes.
This was my secondary school classmate who I thought I knew to an extent. On December 28, 2020 he did the 1st and 2nd stage in my family marriage list which bride price happened to be on the 2nd stage which he paid. After he paid my bride price he started maltreating me.
2021 was hell for me that at some point I left home, after everything we settled around November 2021 which he promised he will never beat me again. But still nothing CHANGED.
This is my reason why I am CALLING OFF the Traditional Marriage (Igba Ngwu) and White Wedding ceremony between me and DAVID OKIKE OFF. (Beating me was not part of the agreement in our Marriage)
This Saturday should have been my traditional and white wedding ceremony day.... I supposed to be happy but I am not. For couple of months now I have been going through a lot.
I have been in a TOXIC RELATIONSHIP for OVER a YEAR now.. I am aware that this may be a shock to many people, especially people from my Home Town. My supposed husband HIT and ABUSE me in any slightest provocation, just small misunderstanding without minding what condition I am into
Because I have chosen ME and I will not live my entire life facing DOMESTIC VIOLENCE. My supposed husband is full of RAGE, BEATING me with his Belt, Stick, Broom is his DAILY ROUTINE, Many a times he had lifted his hammer"Beating me was not part of the agreement in our marriage" - Nigerian lady calls off her wedding few days to D-Day as fianc? allegedly turned her into punching bag on me and this Monday last week just because of little misunderstanding he beat me mercilessly and on the process of it he rushed into his mother's kitchen for a cutlass, when I noticed he's going for a weapon I locked the door behind him which he forcefully opened, both his mother and Sisters and some neighbors were begging him not to cut me with the cutlass ... With all these things and more I am fed up.
I AM CALLING OFF THE WEDDING AND TRADITIONAL MARRIAGE (IGBA NGWU) BETWEEN ME AND DAVID OKIKE that supposed to hold on this Saturday 16th, April 2022.
Please to my family and friends I am so sorry for any inconvenience this may have caused you.
But I will not end up with a man who always promise that if I didn't kill him, that he will kill me.
I am still suffering from unstoppable headache I sustained from the head injury he gave me 3 weeks ago.

The "bride price paid" will be Returned in due time. Please Respect my choices. Thanks and God bless you all. ©ADA UBURU. 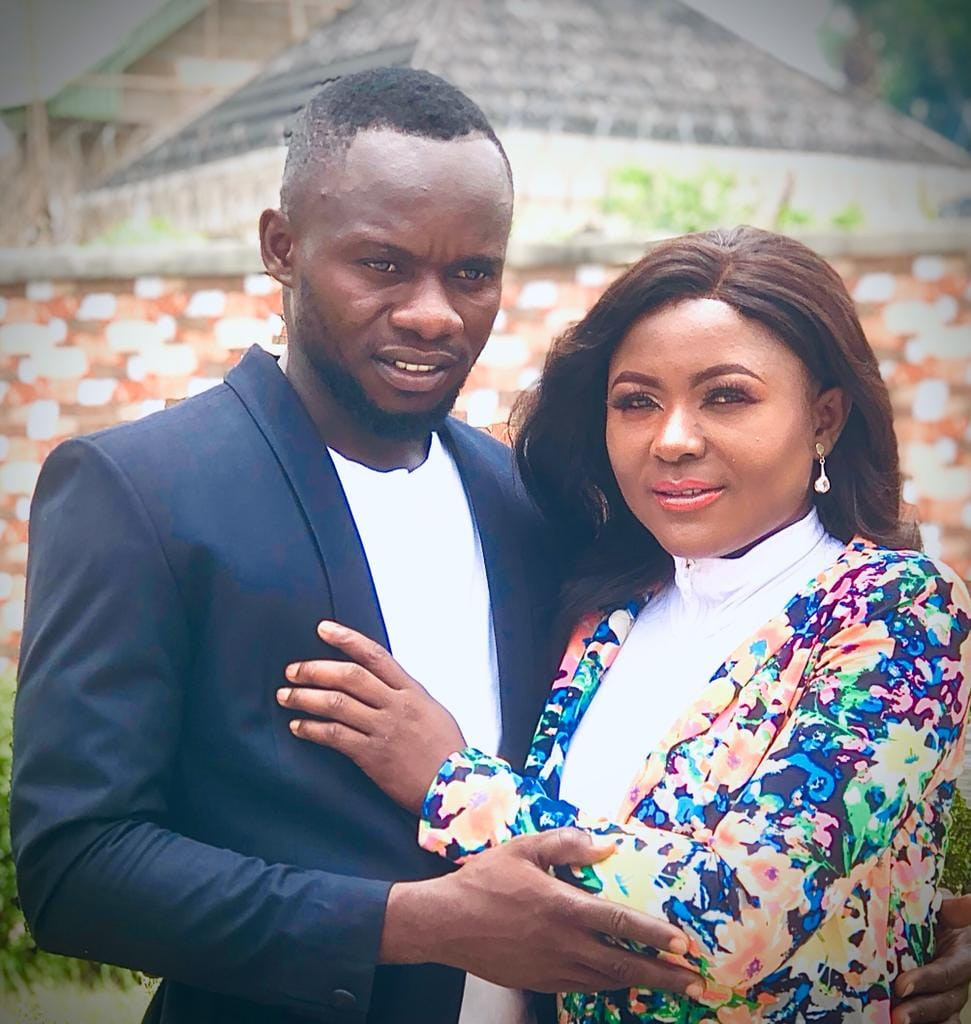 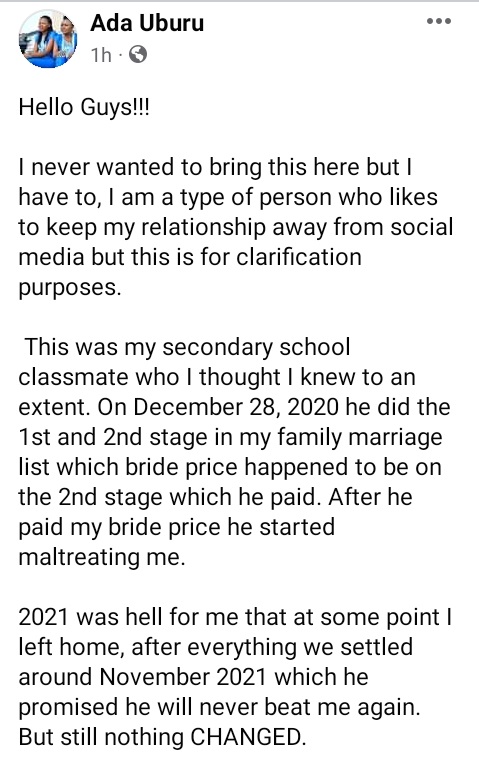 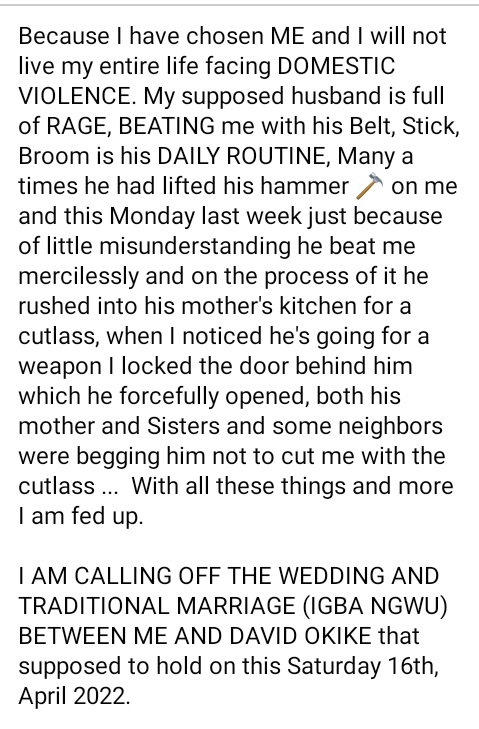