The ongoing Council of State meeting is the fourth session under the Buhari administration with the last one in August 2020. 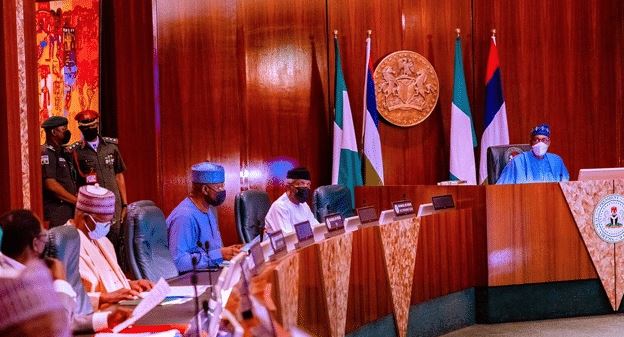 Following the worsening insecurity and economy of the nation, President Muhammadu Buhari is presiding over the Council of State meeting at the Presidential Villa, Abuja.

The ongoing Council of State meeting is the fourth session under the Buhari administration with the last one in August 2020.

The meeting, which started by 10am, has Vice President Yemi Osinbajo; Secretary to the Government of the Federation Boss Mustapha; National Security Adviser Babagana Monguno and Chief of Staff to the President Prof. Ibarahim Gambari.

Others are attending the meeting virtually from their various locations.

Before the commencement of proceedings, the Council observed a minute silence in honor of former Head of Interim Government Ernest Shonekan, who died on January 11, 2022.

The meeting is the fourth in the current administration.

The Council of State is an organ of the Federal Government saddled with the responsibility of advising the executives on policy making.

Matters of insecurity and economy are however expected to form part of today’s discussions.