2023: Tinubu And Osinbajo Told To Give Up Presidential Ambition For Southeast


Ifedioranma told newsmen in Awka that giving up their ambition was the way to the path of justice, equity and fairness. 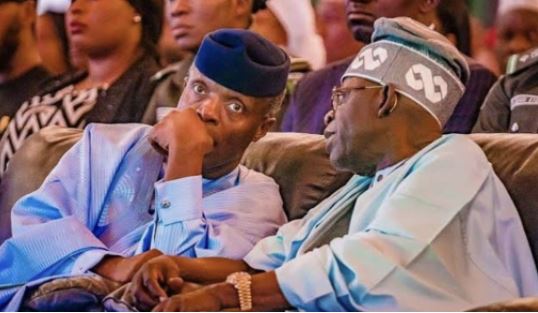 Dr Timothy Ifedioranma (APC-Njikoka – I), an Anambra lawmaker, on Friday charged Vice-President Yemi Osinbajo and Bola Tinubu to give up their presidential ambitions for the Southeast.

Ifedioranma told newsmen in Awka that giving up their ambition was the way to the path of justice, equity and fairness.

He said, “Both Tinubu and Vice-President Osinbajo are citizens of this country and they are qualified to contest and occupy that position in this election.

“But I urge them as elder statesmen to toe the path of justice, equity and fairness by giving up that position for a South easterner to emerge.

“When it was the turn of the Southwest after the annulment of the 1993 election and the death of Chief MKO Abiola, we supported them.

“The Southeast has not had its turn of being the president of this country and it has sacrificed by supporting the North, the Southwest and the South-South.’’ He said and queried: `Why is it a problem for them to support the Southeast?’’

The lawmaker urged political parties to give their tickets to the Southeast and allow the electorate decide the best candidate to occupy the position of the president.

Ifedioranma said that electing an Igbo as president in 2023 would quell the agitations for separation in the country.

“Our people are angry that they are being marginalised and treated as second class citizens in a nation to which we belong and are part.

“When there were agitations in the South-South, Dr Goodluck Jonathan was thrown up as vice-president and the agitations stopped.

“When the military annulled Chief MKO Abiola’s election in 1993 and he died in incarceration, it became clear that there was the need to make amends and pacify the Southwest, and we all supported it by electing Chief Olusegun Obasanjo.

“For fairness, equity and justice, we need to deal with the structural problem by throwing up an Igbo man and all these agitations, demand for separation and insecurity will stop, and peace will be restored to Nigeria,’’ Ifedioranma stressed.

Tinubu and Osinbajo, who are both of Southwest extraction, already declared their interests to contest the 2023 presidential election on the platform of the APC.