The highway was on lockdown for several hours, as the placard-carrying protesters erected barricades on every available space on the highway. 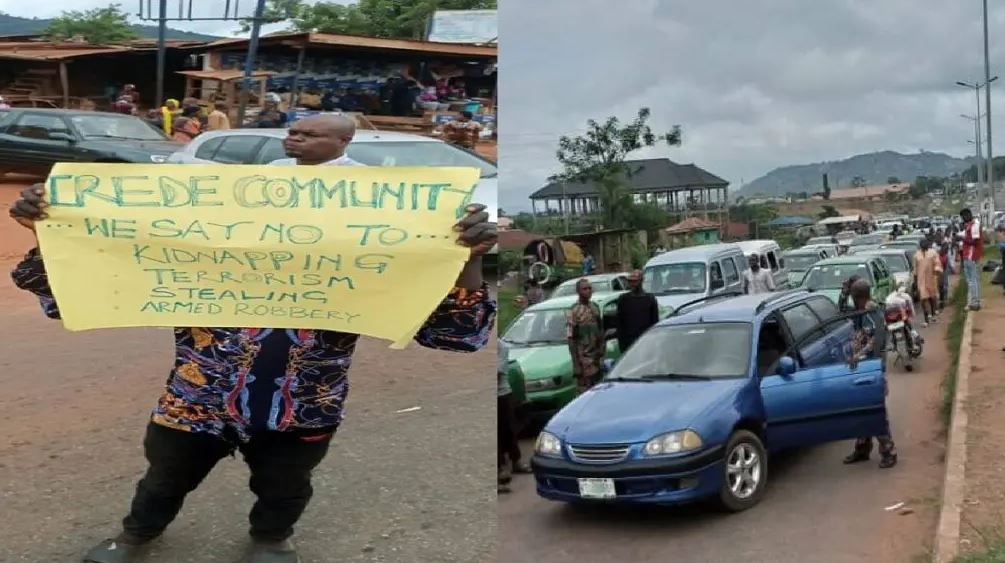 Aggrieved residents of Ajebandele area, along Ado-Ikere-Akure road, in Ado-Ekiti, on Monday, blocked the road while staging a protest against incessant abductions and robberies in that section of the capital city.

The protesters, who were from Irede community, Ajebandele area of the capital city, were protesting the alleged kidnapping of a Pastor Julius Osunluyi, in the area, on Sunday evening, by suspected abductors.

Gun-wielding men, suspected to be kidnappers, were said to have besieged the pastor’s church and abducted him.

The highway was on lockdown for several hours, as the placard-carrying protesters erected barricades on every available space on the highway.

Commuters coming into Ado Ekiti from either Akure or Ikere and those traveling out of the Metropolis were trapped for several hours with their vehicles stagnant due to the blockade by visibly angered protesters.

Addressing the people, one of the protesters, who identified himself as Ajayi Olayiwola, said: “The state of insecurity in Irede community area is alarming as we could no longer sleep with our two eyes closed.

“This protest is to call the attention of appropriate authorities to find a solution to the ugly development, particularly the police.

“This disruption of free flow of vehicles is to send a signal to the public about our plight and for the police Command to do the right thing.”

The Police Public Relations Officer, Ekiti Command, Mr Sunday Abutu, said: “The police in Ekiti are not taking any chances. We are doing our best to tackle crime and criminality.

“The CP had ordered our patrol teams and a team of detectives to up their games and ensure that those perpetrating crimes are brought to book.

“If you notice, our night patrol had increased. And the CP had urged Rapid Response Squad to trail the alleged kidnappers and bring the man out from their den hale and hearty.”