A Nigerian man who opened a 'mama put' in London has shared his story so far. 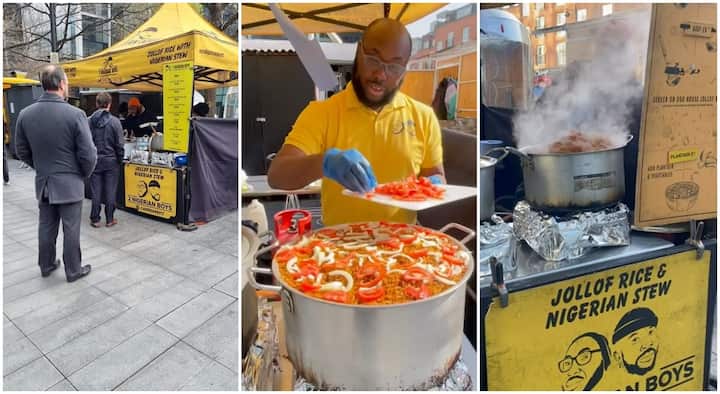 A Nigerian man who opened a jollof rice 'mama put' in London has shared his experience.
Azeez said he sells sweet Nigerian jollof rice on the streets of London.
According to him, many Oyinbo people are patronizing him because of the sweet taste of his food.
In a photo shared on Twitter by @IamOlajideAwe, some Oyinbo people could be seen as they lined up to buy food from the restaurant.
In a short chat with Legit.ng reporter, Azeez said he started the restaurant with one other person, but that he now runs it alone.
Azeez said: "I'm from Lagos, Surulere. We live in London so we decided to bring food to the city. We were two when we started but now, I'm running myself."
When @IamOlajideAwe shared the tweet, it generated interest from Nigerians who commended the hustling spirit of the man.
See the tweet below:

If you find yourself in London around Spitalfields market do well to support our own abeg.. pic.twitter.com/SFL8sws3Bt