He maintained that any Southeast Governor or Igbo leader who is not standing with their people would become isolated. 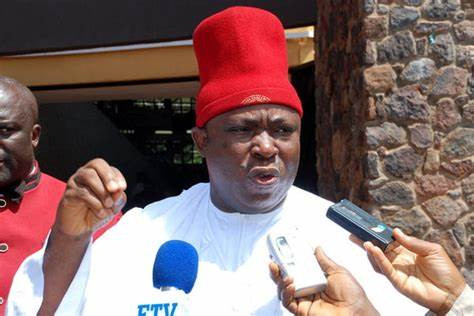 Former national chairman of the All Progressive Grand Alliance (APGA) Senator Victor Umeh has sent a warning to all Southeast Governors and politicians against Igbo Presidency in 2023.
According to him, such individuals are on a mission of self-destruction.
Umeh, who spoke to newsmen in Enugu at the end of the Imeobi meeting of Ohanaeze Ndigbo Worldwide in Enugu, insisted that the people of the southeast were united in the aspiration that somebody from region should be the next President.
He maintained that any Southeast Governor or Igbo leader who is not standing with their people would become isolated.
The former APGA boss, who represented Anambra Central in the Senate, said: “The Governors jettisoning Igbo presidency are minority already. This is so because when you go out of the mainstream of your people’s desire, you will be on a mission of self-destruction.
“Maybe some of them fell into the trap of comradeship of governors being brothers. But what is paramount is where your people stand. Everybody must stand with his people in leadership. If you don’t stand with your people, you become isolated”.
He added that ahead of 2023 presidential election, Southeast people have made it abundantly clear that for justice and equity to prevail in Nigeria, there is a compelling need for the region to produce the next President.
“The Southeast has eminently qualified people who can provide leadership that will bring prosperity to Nigeria. It is not in doubt at all.
“Igbo leaders at the Imeobi meeting of Ohanaeze, which is the conclave, have painstakingly looked at these things and stand firmly together as a people that the only way Nigeria can move on will be for us to accommodate each other. We must show sincerity of purpose and mission towards achieving unity for Nigeria.
“It does not help the country if people begin to tell others that they cannot do anything.
“Actually, nobody can do it alone. We have said it clearly that for Nigeria to remain together, there is the need to share power with all Nigerians. It’s not something somebody will take and run away. We have also looked at the demographics to prove that nobody can do it alone,” Umeh said.
He advised Governors and political leaders from the region to be in the vanguard of the Igbo unity by standing with their people on the quest for a President of Southeast extraction.
Umeh said: “We are appealing to our brothers, not only the governors but anybody who is still standing against this popular quest by the people of the Southeast to produce president, which incidentally the people of the Southsouth have supported through their cultural organization, PANDEV. The Middle Belt Forum and Afenifere have also supported it. So, there is no reason why a Southeasterner should be kicking out of the box.
“We appeal to them to know that we must stick together to pursue our common destiny”.
He assured that the Igbo would rally round any party that would choose its candidate from the Southeast.
“What I can assure you is that once somebody from the Southeast gets the position, the whole Southeast will root for that person.
“In 2019, when Peter Obi became the vice Presidential candidate of the PDP, Ohanaeze Ndigbo endorsed that ticket of Atiku/Obi and Southeast delivered totally to the PDP. So, it doesn’t matter where one or two persons are standing based on their personal relationships.
“The people of the southeast are united in this aspiration that somebody from here should be the president next year. Not by force, but for is to heal the wounds of the past and move on together as a people”.
He maintained that “It will be paying lip service for us to be one people, one country and one nation if we don’t make efforts to really unite. Today, Nigeria is a country with so many nations. The only thing that is making it to look like that is because people are not happy with the way things are going.
“If our political gladiators are sincere that they want to keep Nigeria together, the best thing to do is to support the southeast on the basis of equity and fairness.
“In the southwest, you can see a lot of presidential aspirants are declaring. It’s funny. The southwest produced Obasanjo for eight years and their son is the current vice president and will serve out eight years next year and election is coming up next year and all.of them are declaring.
“I think that they’re looking for a break up of Nigeria. This is because if they want Nigeria to be united, they will not be seeking to occupy that office in 2023. It will be insensitivity to the need to gum our people together. Let them be united in one mission of having a virile, united country.
“If at the end of the primaries and they think that they can do it that way, I can assure you that the restiveness in the country would continue.
“So, we give to Caeser what is Caeser’s and give to God what is God’s. Justice does not hurt anybody”.
Top Stories