Erikpume, in a telephone chat with Punch on Sunday, said the CBN governor had registered as an APC member since February 2021. 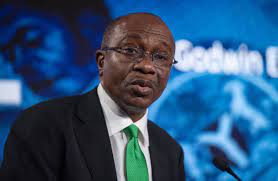 It has been confirmed that the Central Bank of Nigeria Governor, Mr Godwin Emefiele, is a member of the All Progressives Congress.
The All Progressives Party Chairman of Ward 6 in the Ika South Local Government Area of Delta State, Mr Nduka Erikpume, confirmed Emefiele's membership of the party.
Erikpume, in a telephone chat with Punch on Sunday, said the CBN governor had registered as an APC member since February 2021.
When asked whether Emefiele had registered in the APC, Erikpume said, “Yes, he has registered since February 2021. He is our member.”
The PUNCH had reported that Emefiele’s alleged involvement in politics on Sunday attracted more strong condemnations, with senior lawyers and other eminent Nigerians calling for his immediate resignation.
Senior lawyers and top politicians, who spoke separately to The PUNCH, stated that Emefiele’s continuous stay as the CBN governor was dangerous to the economy.
Three interest groups – the Rice Farmers Association of Nigeria, Friends of Emefiele and Emefiele Support Group – last week paid N100m for the APC presidential expression of interest and nominations forms for Emefiele.
But the CBN governor, in a tweet on Saturday, said he was still waiting for God’s direction, adding that he would purchase the N100m forms himself if he entered the presidential race.
He said that he would continue to serve the country in his capacity as CBN governor until he received divine counsel to contest for a higher office.
A Senior Advocate of Nigeria, Kunle Adegoke, in a telephone with The PUNCH on Sunday, said the CBN governor should resign his appointment and become a politician if he intended to contest in the 2023 general elections.
He said, “The governor of the central bank is expected to be impartial and not be driven by his own personal interests or the interests of a political party. Emefiele, as the governor of the Central Bank of Nigeria, represents all Nigerians and in that capacity, he is obliged under the constitution to serve each person irrespective of their political party or affiliation.
“With that evident, it would be grossly irresponsible for anybody to be agitating for the CBN governor to join politics. The CBN governor is not entitled as a citizen of Nigeria to contest for a political office, but where he desires to do so, he will have to resign his appointment and become a politician, strictly speaking.
“The honourable thing for him to do is to resign if he is the one behind all these calls for him to come and contest. Where he is not the one, he ought to have come out earlier than now because we could see on social media, the branded vehicles and then the claim that farmers have spent N100m to buy him a nomination form of the All Progressives Congress. That is questionable. The few farmers who are debtors under the Anchors Borrowers’ Programme cannot now be deploying their resources towards this.
“That also questions the integrity of funds and the whole ABP project. Emefiele is supposed to stay away from such things that will lead to unnecessary scandals.”
Another SAN, Babatunde Ogala, told The PUNCH that it was inappropriate for a CBN governor to be involved in politics, adding that Emefiele “should resign now or be removed.”
On whether it was within Emefiele’s rights to run for office, Ogala said, “That means Chairman of INEC (Independent National Electoral Commission), Chief of Army Staff and the Inspector-General of Police can also pick up forms and decide to run. It is immoral and a joke taken too far. He shouldn’t ridicule our country. Where is that done?
“The CBN governor, the one who is supposed to manage our treasury, is getting himself distracted by politics. It is inappropriate. Emefiele should resign now. If he wants to join politics, let him go into politics. He shouldn’t sit down as the head of the treasury and be talking politics when he should be concentrating. That means he’s a card-carrying member of a political party. It’s unacceptable.”
Top Stories