Ganduje's decision has triggered opposition from some leaders of the All Progressives Congress, APC, in the state. 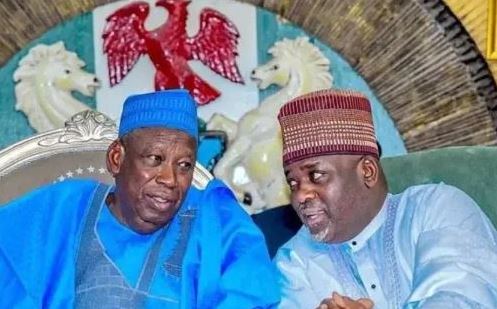 Governor Abdullahi Ganduje has chosen his deputy, Nasiru Yusuf Gawuna to be his successor in the forthcoming 2023 governorship race in Kano State.

This decision has triggered opposition from some leaders of the All Progressives Congress, APC, in the state.

Ganduje anointed Gawuna as the preferred choice of the APC for the 2023 governorship election at a stakeholders meeting held behind a closed door at the Government House on Saturday, which lasted throughout the night till yesterday morning.

It was also gathered that the meeting prevailed on the former Commissioner for Local Government and Chieftaincy Affairs, Murtala Sule Garo, who was eyeing the governorship seat and favourite candidate of Ganduje’s wife to step down his governorship ambition and become Gawuna’s running mate in the election.

But a former Speaker, Kano State House of Assembly and an APC governorship aspirant, Kabiru Alhassan Rurum in protest, dumped the party to further his governorship ambition.

Rurum, member representing Rano, Kibiya, Bunkure Federal Constituency and Chairman House Committee on Pension said he defected from the ruling party because he foresaw that the zone (Kano South) is about to be left out in the scheme of things and in the fielding of candidate to contest for the governorship seat.