Recall the two were rumoured to have fought over a certain man before they stopped being friends. 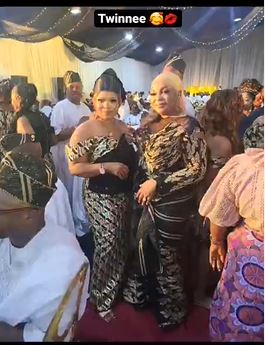 Nollywood actresses, Laide Bakare and Kemi Afolabi have put an end to their longtime rift.

Recall the two were rumoured to have fought over a certain man.

Shortly after the rumour made the rounds, the actresses stop commenting on each others social media pages and stayed a far from each other.

Anyway, those in the know said, Laide was the first to get in touch with Kemi when news of her ailment broke. The source said, they could be fighting but Laide will never wish her dead, so she decided to reach out to a one time friend, and they made up.

Laide even went ahead yesterday, Sunday, to share a video of herself and friend at an event, writing ‘’here comes the queen, we love you’.

Sharing the video, she captioned it; “Here comes the Queen Kemi Afolabi, we love you.”