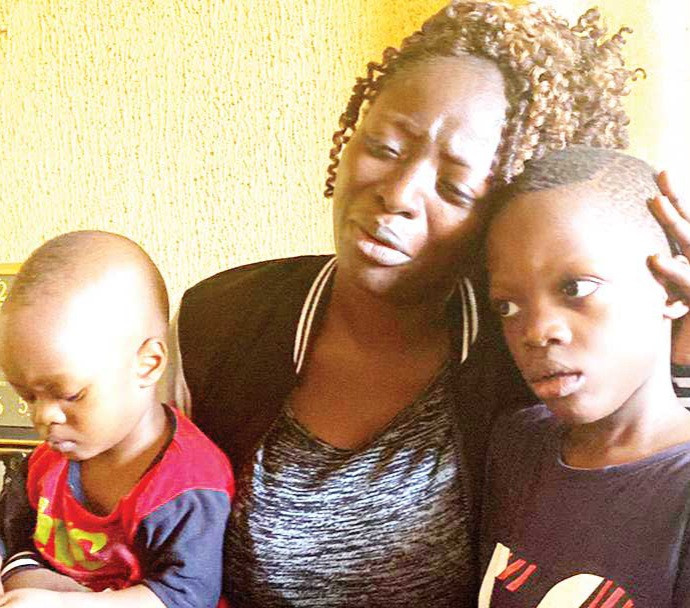 The wife of a sound engineer lynched in Lekki by Okada riders has begged for help.
In a video interview with Guardian Tv, Grace David Bolu narrated how the incident happened.
Her husband was lynched and burnt to death by commercial motorcyclists in Lekki over N100.
The 36-year-old mother-of-two said her husband David Imoh, 37, was killed on Thursday, May 12.
She said she was disoriented when she got the call that her husband had died. She was at her parent's place at the time and she said she ran into the church to give her dad the phone to see if he could understand the tragic message the caller was passing across.
After the phone call, she left with her family and some of David's family members to find out more about his death, only to hear that he was lynched and burnt in the most horrific manner.
She alleged that Beer Barn, the leisure facility where her husband went to play on that fateful day, shut its doors against him when he tried to escape from the mob.
Grace, a senior Technical Officer, at Ijede Local Council Development Area (LCDA), Ikorodu in Lagos, said reports that her husband was a passenger of the motorcyclist was false. She said her husband only tried to intervene when two of his colleagues were getting lynched by the motorcyclists.
When her husband saw that the motorcyclists were overpowering him, he ran back into Beer Barn but he was pushed out.
The mob that went after him returned with David to the street only to find that David's colleagues, who they had beaten to a pulp were no longer lying on the street. They had been taken away to a hospital by good Samaritans.
They then transferred the anger to David and beat him up before setting him ablaze.
She said: "I got to know about the incident on May 13, 2022, through his colleague, Melvin. I was in the church at Ajao Estate when the call came in.
"My husband only came out of Beer Barn to intervene when his colleagues were being beaten over N100 change and they started calling them yahoo boys and ritualists.

"The motorcyclist had agreed to convey them to their destination for a fee of N400, but they gave the bike man N500. He told them he does not have N100 balance and Dave’s colleagues persuaded him to accept N300, which was the only change with them with the promise to balance him N100 next time they come to the area to play, but motorcyclist refused. So, they started arguing.
"When the situation degenerated, some people ran inside to call the rest of the members of Legacy 360 band, which my husband was part of. They stepped out with the hope of rescuing them, but when they got there, they discovered that riders were more than the number they could handle. My husband and others ran back into the bar, but instead of the manager to help them, he sent my husband back that he doesn’t know him.
"My husband was not just beaten, they put tyres on him as if he was a robber.
"I’m a civil servant, how much is my pay to take care of my children? My marriage of nine years has just ended. My husband does two jobs just to take care of us; he worked in the morning as a sound engineer at Church of God Mission, Lekki and works with Legacy 360 band on Thursdays and Fridays. He comes home on Sundays after service and returns to Lekki on Tuesdays just to fend for us."
Explaining how his colleagues escaped and left her husband to die, she said: "When the manager pushed my husband out, his other colleagues were rescued, they unleashed the anger of not catching his colleagues on him."
Describing her husband, she said: "Dave was a hardworking man, he can go to lengths for anybody. He was a caring and loving man and father; David-Imoh did everything legal to care for us.
"I feel bad when I heard that people labelled him a ritualist. Most of his friends and acquiantances don’t know the name Dave, but when they hear Dave Sound, they recognized him. People in House on the Rock, Redeemed, Church of God Mission International know Dave. My husband was not a ritualist. He was a lover of people and a lover of God. I have two kids for him, the first, Samuel David is five-year-old, while Emmanuel David is a year and five-month-old."
The widow said nobody from the government has reached out to the family since the incident.
She said: "The Lagos State governor, Babajide Sanwo-Olu, should come to my aid and help my children.
"I need justice for my husband, this must not be swept under the carpet. He was my support. I just finished my Post Graduate Diploma in Mechanical Engineering at Federal University of Technology, Akure (FUTA)."
Watch the video below: