The suspects were rescued by the police from being lynched by a mob after the body of the boy was discovered four days after he went missing. 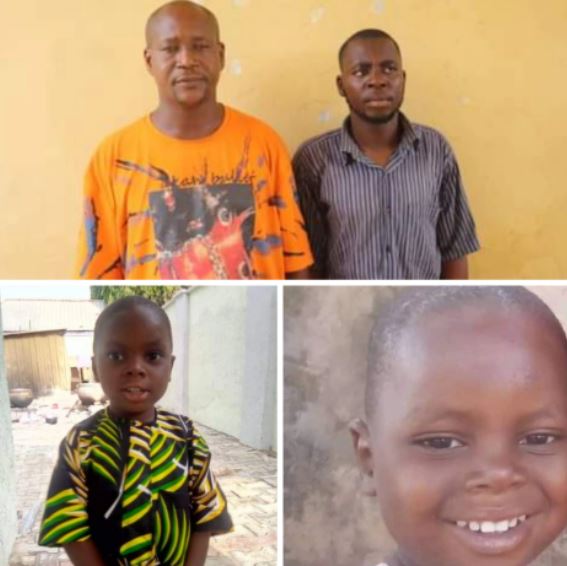 Two suspects fingered in the ritual murder of a 4-year-old boy in Lapai Local Government Area of Niger State have been arrested by the state police.

TORI had earlier reported that the suspects were rescued from being lynched by a mob after body of the boy was discovered four days after he went missing.

Spokesperson of the command, DSP Wasiu Abiodun, in a statement on Tuesday, May 24, said the suspects, Mubarak Yunusa and Emmanuel Okuagba, have been transferred to SCID Minna for discreet investigation.

"However, on 20/05/2022 at about 2100hrs, information was received that one Mubarak Yunusa aged 27yrs ‘m’ of Magaji primary school area was sighted with a strange sack heading towards a stream in the area

"Upon the receipt of this information, Police operatives attached to Lapai Division arrested the said Mubarak Yunusa.

"During interrogation, the suspect confessed that he dumped a dead body, packaged in a sack at a river within Lapai area, he confessed further that the sack was given to him by his shop landlord, one Emannuel Okuagba aged 43yrs ‘m’ of Anambra State who resides in Lapai.

"In the course of investigation, Mubarak led a team of Policemen to the river where a decomposed body of the said missing boy, concealed in a bag was recovered and taken to general hospital Lapai for autopsy.

"The second suspect, Emmanuel was equally arrested and the Commissioner of Police, Niger State Command CP Monday Bala Kuryas, fsi ordered for a thorough investigation as the two suspects were transferred to SCID Minna for discreet investigation.

"Consequently, angry mob mobilized to Lapai Police Division demanding for the release of the suspects for them to lynch, but as their efforts were futile, the mob stormed the shop and house of the suspects and set them ablaze.

"Members of the public are hereby urged to desist from mob violence, jungle justice and support the Police and other security agencies to carry out their lawful responsibility in ensuring dispensation of justice."