Okorocha said though he respects Tinubu a lot, the South East presidency is something that should be understood naturally. 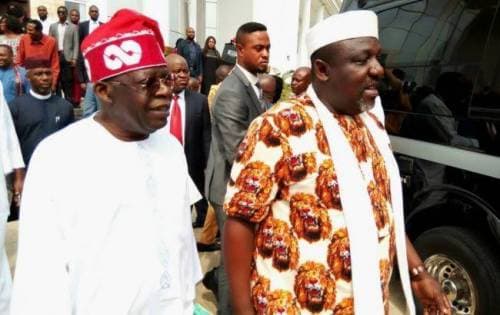 Senator Rochas Okorocha has claimed that Bola Ahmed Tinubu is distressed by his presidential ambition.
Okorocha who is a former governor of Imo State and a presidential aspirant of the ruling All Progressives Congress (APC) added that Tinubu believes he deserves the presidency because of his contribution to the party.
Okorocha who is the senator representing Imo West, said this in an interview on ARISE TV.
On the recent move by the five Presidential aspirants in the South East who have united to push for an Igbo candidate for the APC ticket, Okorocha said though he respects Tinubu a lot, the South East presidency is something that should be understood naturally.
He said, “I think it’s just natural, and that everybody should know, and I don’t know what’s behind the mind of Tinubu but I respect him a lot, but I think Tinubu is in distress, because he feels that it’s a time to compensate him on the basis of the role he played in the formation of APC which some of us were part of it.
“So everybody has reason why he’s coming out, and these things define power and strength. He [Tinubu] believed that he has made people and this is the time people should allow him or make him or something. More like a reward system.
“But more than that, we are talking about the nation called Nigeria. We have to have a nation first before personal and individual sentiments will come at play.”
Top Stories