The 45-year-old was at her house on Friday when she allegedly drank what was suspected to be insecticide. 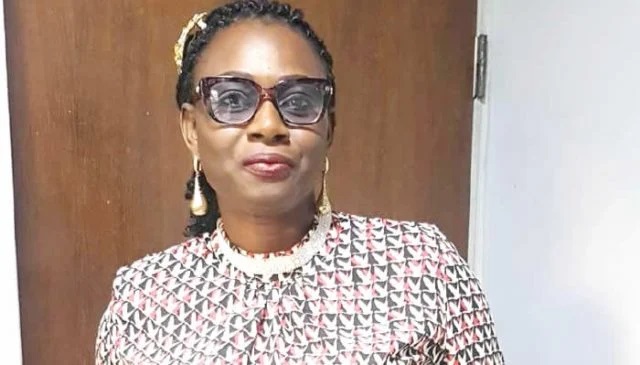 Folake Abiola
A 45-year-old accountant has taken her life in Lagos.
The Lagos accountant identified as Folake Abiola committed suicide at her residence at Osapa London, in the Lekki area of Lagos State, according to Punch.
She reportedly killed herself on Friday by allegedly drinking a poison suspected to be insecticide.
She was said to have died shortly after, as her family members, friends and men of the Nigeria Police Force met her lying motionless.
A colleague of the deceased, who spoke to our correspondent on condition of anonymity, said Abiola had been suffering from depression for years, adding that the news of her death was shocking.
Contrary to claims online that Abiola committed suicide due to loneliness, lack of a husband, among others, the colleague said her associates knew that she had been in romantic relationships, adding that she ended them due to depression.
The source said, “She had been suffering from depression for years and her death has nothing to do with loneliness or lack of a husband or sex. Within the last seven years, I know she was in a relationship twice.
“She ended those relationships on her own because of depression. She said she did not want to bring someone else into her life when she could not take care of herself. She was going through extreme depression, but people that did not know what she was going through have been posting rubbish online.
“She was a senior accountant at a telecoms firm and we are colleagues. She took her life herself and was buried that same Friday as she was the only Christian in her family.”
The colleague described Abiola as an angel, a conscientious accountant and a lover of Christ, who was liberal in giving, adding that she had been saying she wanted to end it all before she took her life.
“In Nigeria, we don’t pay attention to mental health; a lot of people are going through depression and it is not necessary that it has to be caused by anything,” she added.
A source said the deceased worked with Globacom Limited, adding that she was on leave when the incident happened.
“She recently celebrated her 45th birthday. She was not talking to people; she always kept to herself,” the source added.
The state Police Public Relations Officer, Benjamin Hundeyin, said the police visited Abiola’s house and met her lifeless body on the floor.
Hundeyin said, “The moment the police in that area were alerted, they arrived at the scene and met the woman lifeless on the floor. A bottle of insecticide was also found by her, apparently, she had ingested that insecticide.
“The family members that were there officially wrote to the divisional police officer requesting for the release of the corpse to enable them to bury her in accordance with Islamic rites and the corpse was released to the family on compassionate grounds.”
Depression is a leading cause of suicide in Nigeria as experts decry lack of proper awareness of mental health in the country.
In December 2021, a Diploma holder, Lekan Odunare, was filmed jumping into the lagoon.
His wife, Sofiat Amusa, later claimed he was driven by depression and frustration.
Top Stories