PDP Primary Election: Why I Stepped Down For Atiku Abubakar - Tambuwal (Video)


Aminu Tambuwal has revealed why he decided to step down for Atiku Abubakar. 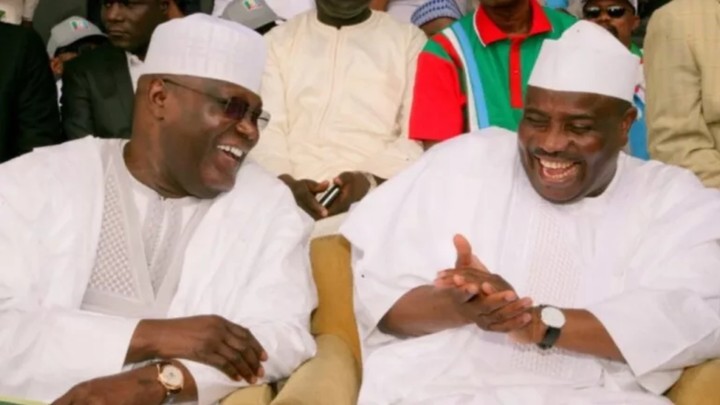 Sokoto state governor, Aminu Tambuwal has revealed why he stepped down for Atiku Abubakar at the just concluded Peoples Democratic Party presidential primary held on Saturday.
According to him, the reason is because he wants to support the person who can win the 2023 election for the party.
Tambuwal said this during a meeting with PDP leaders.
Below is a part of the conversation.
Tambuwal: For PDP, I have a question. And all of us here are PDP. Are we looking for zoning or winning?
Audience: winning
Tambuwal: No, I didn't hear you
Audience: Winning (louder)
Tambuwal: We want to win the election?
Audience: Yes
Tambuwal: Now, with due respect, what I am going to say, I don't mean any offence.
I see my leader, Olisa Metuh coming. I am going to use your state as a reference point (he points at Metuh). And with due respect, the people of the Plateau, I will use your state as another reference point (he points at the audience).
We had an election in Anambra State. The governor of Anambra State won the election 112,000 votes. The person next to him - the PDP candidate secured about 53,000 votes. The third - the APC candidate had 24,000 votes. The fourth - YPP candidate had about 20,000 votes. Put together, in that state election (governorship), we had about 220,000 votes in between four political parties.
Jos Bassa Federal Constituency, Plateau State, where PDP won, the PDP candidate had about 40,000 votes. PRP had 37,000 votes, then APC had 26,000 votes. If you add this, it is close to 100,000 votes (Federal Constituency Election).
So, demography is an issue. That was why after the election, I appealed to PDP to look at these elections and be studying elections and bye-elections as to progress towards 2023.
APC took their ticket to Katsina in 2015 where the last president of PDP, Umaru Musa Yar'Adua died in office in 2010. Five years later, APC, out of strategic thinking , with Bola Tinubu and the rest of them. I was part of it. We said we are looking for how to win. We must get power before we share it. And deliberately, we took APC ticket to Katsina and gave it to Muhammadu Buhari. Yes, Atiku Abubakar contested, Musa Yar'Adua contested, Sam, Rochas Okorocha. But we all knew where we were going. Because we were determined to win.
And let me tell you, had APC given that ticket to somebody from South. In particular, South-South , we couldn't have won.
Go and check the election result of 2007. In 2003, President Buhari had 11 million votes but in 2007, he had 7 million votes against Yar'Adua because they are from the same Katsina. And he couldn't win him (Yar'Adua).
Now, this is for PDP. In the South as at today, PDP is in 8 government houses. APC is also in 8 government houses, leaving 1, that is Anambra.
In the North, APC is in 14 government houses. PDP is in 5 government houses. And they have the President.
I have given you this analysis, so that together as leaders of our party who are working towards winning election. Not zoning, not winning ticket. Yes, you can share ticket because you can tear it and everybody can take his piece and go to his zone. But you must plan to win election. That is the reality of it. It is not anybody's making."
Watch video below:
Top Stories