The Twitter user warned women that being in the wrong marriage is worse than being single. 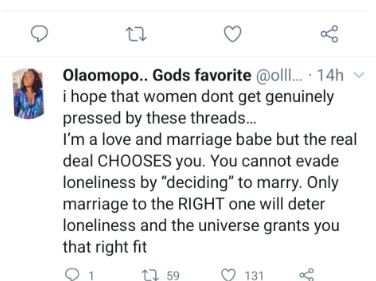 A divorced woman who is in her 30s has advised women not to be influenced by tweets encouraging them to settle down to avoid being old and single.

A tweet shared by a man had gone viral days ago. In it, the Twitter user advised women planning to migrate to other countries to try to hold on to their Nigerian boyfriends if they have one because it's harder to find men abroad.

The Twitter user warned that women who are more focused on career and migration may and up single and lonely despite having so much money.

Reacting, a Twitter user warned women that being in the wrong marriage is worse than being single.

She wrote: "As somebody who has been married to the absolute wrong one and is now 30+ and single, i can tell you for FREE that those threads dont touch me at all because i KNOW that the wrong marriage is absolutely WORST than being single."

She added: "i hope that women dont get genuinely pressed by these threads…

I’m a love and marriage babe but the real deal CHOOSES you. You cannot evade loneliness by “deciding” to marry. Only marriage to the RIGHT one will deter loneliness and the universe grants you that right fit."