It was gathered that despite that the school has a Chemical Engineering Department with experts in various chemical fields and management, they were not being carried along by emergency responders and neither was their expert opinion sought. 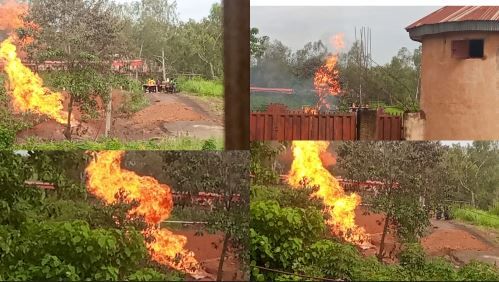 Efforts to contain a fire outbreak which is now being suspected to be methane gas that emanated from a water drilling site at the Caritas University, Amorji-Nike, Enugu have defied all solutions thrown at it.

When SaharaReporters visited the site on Tuesday, the fire was still raging as emergency responders met at the site appeared to have run out of ideas on how to extinguish the fire which had been raging continuously for nearly two weeks.

Sources in the area told SaharaReporters on Wednesday that the situation had not changed.

It was gathered that despite that the school has a Chemical Engineering Department with experts in various chemical fields and management, they were not being carried along by emergency responders and neither was their expert opinion sought.

A lecturer with the university, who spoke on condition of anonymity, told SaharaReporters that the fire might have been caused by methane rather than the insinuations that it was natural gas.

He said methane is extracted from coal.

A chemical engineer, Henry Nwachukwu, described the fire incident as an environmental hazard, which he described as a complex issue.

He said, "From the report I got, some amateur during drilling came in contact with some substance and did not seek the knowledge of a professional. There is methane because methane does not have smoke; the only colour it has is flame colour which is brownish or golden with about 40 per cent of air which is what energises the fire to be flammable.

"This flame is enormous because with the methane - 40 per cent and liquid source from cashew, it can be used for aircraft petrol. So, with that, this needs urgent attention for professionals so that our natural resources would not go to waste."

According to the expert, the substance can be used for power generation. He, however, regretted that bureaucracy is the bane of Nigeria’s problem.

"The sickness in Nigeria is bureaucracy. If anybody should come up with an idea now, the idea might not see the light of the day because somebody at the top would like to be the one to be the inventor, not the person who is a professional, who has the know-how," he said.

He, however, said that to contain the fire, the source of energy would have to be considered.

"So all you need to do is to take away the energy in the methane and the fire can be submerged," he said.

Meanwhile, Enugu Capital Territory Development Authority, ECTDA, has said that it will commence a house-to-house search for unauthorised boreholes in the state.

Chairman of ECTDA, Dr. Josef Onoh stated this when he visited the site of the fire outbreak.

Onoh said it was an act of economic sabotage for residents to drill boreholes without approval from the relevant government agency, noting that the state would henceforth demand approvals from people drilling boreholes in the state.

He said: "The Enugu Capital Territory Development Authority is going to begin an intelligent clampdown on more, especially along the oil and gas pipeline that runs through Enugu state.

"From June, which is next month, this agency will begin house to house inspection together with the Ministry of Environment, to clamp down on all the illegal boreholes so as to avert such fire disasters in the state.

"We will not show mercy in the exercise because one is supposed to do a proper geological survey before embarking on any form of excavation or drilling. We shall also prosecute those found guilty."