The event, tagged, Shop for Free, was the church’s annual programme, where free items donated by members and its partners are given out for free to members of the public. 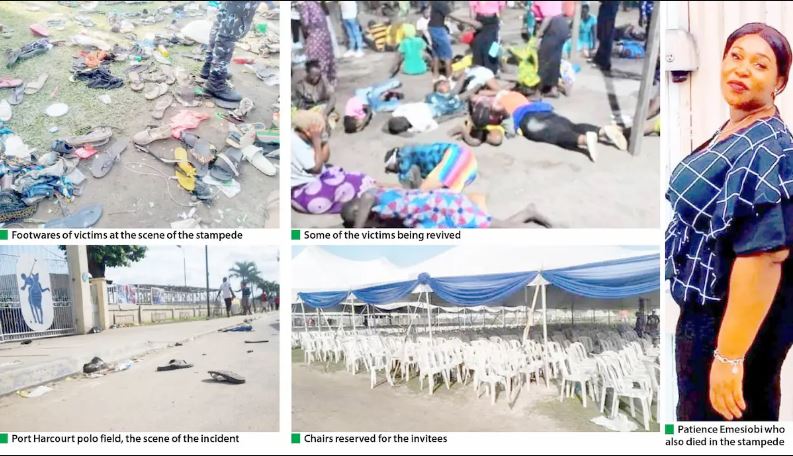 Last week, 31 persons were confirmed dead during an early morning stampede in Port Harcourt, the Rivers State capital. A pentecostal church, the Kings Assembly, had organised a free distribution of items at the popular Port Harcourt Polo Field.

The event, tagged, Shop for Free, was the church’s annual programme, where free items donated by members and its partners are given out for free to members of the public.

An eyewitness account had it that some of those who were invited to the event arrived a day before the incident while others arrived as early as 6.30am. It was expected to start by 9am on that fateful day.

He said some persons who were supposed to have a sports session arrived about 8am and opened the small gate, which gave the surging crowd an opportunity to push in; hence the stampede.

“The church invited people for its fourth edition of food and gift items distribution. Some came since Friday while many others came as early as 6.30am on Saturday. The crowd wanted to gain access through the small gate when it was opened and there was stampede. I counted 21 dead bodies on the ground,” the eyewitness said, adding that some of the victims included a pregnant lady and three children.

Samuel Orji-Eke, who survived the incident with an injury in one of his hands, said he lost his five-year-old son in the stampede. He blamed the management of the church for the ugly incident and called on the authorities to ensure justice for his son.

Narrating his experience he said, “Around 6:30 am, I attended the church programme with my three children. I was holding my son and carrying my six-month-old daughter in my arm and my wife was holding the other one. When we got there, the gate was locked and the crowd was not much. People were not allowed to enter.

“In such event the gate was not supposed to be locked. This made the crowd to increase, such that the entire road was blocked. That was when they opened the small gate and there was a mad rush to enter. It was in that process that the stampede occurred.

“We had entered the gate when people started falling and the ones behind trampled on them. The surging crowd trampled on me and broke my hand and my son slipped off and was marched to death.

“For now, we have not heard anything from the church. The pastor has not said anything, but from the information we gathered from the military hospital, they said the pastor was aware of the incident but could not come to visit, for fear of being lynched. He said they should collate details of everybody affected and he would take full responsibility. They took our phone numbers and names.

“As at the time of the incident, there was no presence of the police, only the ushers were there. It was when the place became rowdy that the police came and started shooting in the air to disperse the crowd, after the damage had been done.”

Orji-Eke also said his son died because there was nobody to administer first aid treatment on him, and called for justice for the victims of the stampede.

Another survivor, Adamma Justice, said she was still looking for her 11-year-old daughter, who was at the venue of the incident.

She said, “I came with two other kids, but I am looking for my daughter. Kings Assembly gave us foodstuff last year and invited us again this year. We were many at the gate. I was not able to carry three of them, so I kept one on the fence and carried the small one on the back. The 11-year-old was in the crowd and they were pushing her; that was how I lost sight of her.”

Also, the death of Patience Emesiobi has brought much agony to her family.

According to her brother, Princewill, the 37-year-old caterer was invited to the event by a friend. He said his late sister got information about the programme in the early hours of Saturday and rushed to the venue, where she lost her life.

He said Patience was the breadwinner of the family and the one taking care of their aged father and other siblings.

“Her friend told me that she was one of those trapped at the gate,” he said, adding that her death has devastated the entire family.

Meanwhile, the management of Kings Assembly has commiserated with the families of those who lost their lives in the stampede. The church, in a press statement issued in Port Harcourt by its head of administration, Chimeka Elem, noted that it was deeply saddened by the incident.

“Unfortunately, lives were lost and many people sustained various degrees of injury. Our medical team has been working to provide help to those affected in the incident,” the church stated.

The statement added that, as a safety-conscious organisation, the church would always take the safety of its congregation and other members of the public very seriously.

The statement further pointed out that the programme started in 2014 as an annual outreach, and its choice of a large venue was to accommodate a good number of people. It added that the stampede was not expected.

The Rivers State governor, Nyesom Ezenwo Wike, has said a panel will be constituted to investigate the cause of the stampede.

In a press statement issued in Port Harcourt by his special assistant on media, Kevin Ebiri, the governor expressed grief over the loss of lives in the unfortunate incident and extended his condolences to the bereaved families.

“On behalf of the government and people of Rivers State, I pray that God grants the bereaved families the fortitude to bear the loss of their loved ones. I also pray for the souls of all the departed to rest in perfect peace. And to the injured, I wish them speedy recovery,” part of the statement reads.