The governor had directed that all flags be flown at half-mast for seven days since Monday, while initially putting the casualty figure at 80. 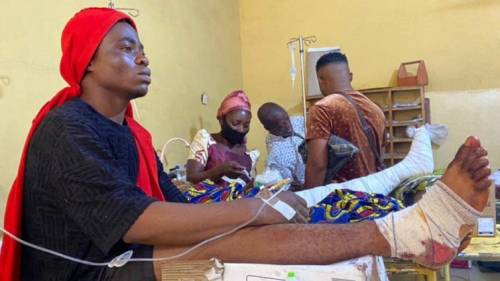 Oluwarotimi Akeredolu, the Ondo State governor, confirmed in a state broadcast that 56 people are still in the hospital while 22 people died in the Sunday terror attack on St Francis Catholic Church, Owo, Ondo State.

The governor had directed that all flags be flown at half-mast for seven days since Monday, while initially putting the casualty figure at 80.

During the broadcast on Tuesday evening, the governor said, “As of now, 56 are on admission, two discharged, while the death toll is 22. Efforts have been deepened to prevent further casualties.

“At Owo, the anger was palpable. The tension was at an abrasive level just as the urge for reprisals was high. Without a doubt too, the ripple impact of this heinous act as well as the understandably angry reaction across the state could not have been different.

“To me, this is an attempt to test the will of the people of the state and indeed, the South West. It, unequivocally, has the brazenly possible consequence of invitation to national anarchy because Yorubaland and Owo in particular, have never been conquered before; and it will never happen.

“I promise you that we shall commit every available resource to hunt down these assailants and make them pay dearly. We shall never bow to the machinations of heartless elements in our resolve to rid our state of criminals.”

Akeredolu urged the people to be calm but remain vigilant and not to take the law into their own hands.

“Leave the rest for government to shoulder. I have spoken to the heads of the security agencies. I can assure you that security operatives have been deployed to monitor and restore normalcy to Owo kingdom.”

He commiserated with the people of Owo, particularly the families of those who lost their lives, the Olowo of Owo, Oba Ajibade Gbadegesin Ogunoye III, and the Lord Bishop of the Catholic Church, Ondo Diocese, Most Rev. Jude Arogundade.

The governor commended the national leader of the All Progressives Congress (APC), Asiwaju Bola Ahmed Tinubu, and the Nigeria Governors’ Forum for donating N75 million and N50 million, respectively, to the victims.

He said he had directed that an account be opened to receive further donations from well-meaning individuals and corporate bodies who may wish to assist the victims of the terror attack.

Meanwhile, the Catholic Church has put the number of the dead at 38.

The Catholic Bishop of Ondo Diocese, Reverend Jude Arogundade, who gave the figure yesterday, said efforts were still ongoing to trace those who took the bodies of their loved ones away without getting to the hospital.

Arogundade said, “The figure that we can account for presently is 38. But we know that many people were taken to private hospitals. Even some people came to take the bodies of their loved ones.

“We are trying to trace those people so that we can have a recount for all. But in the Catholic hospital which is Saint Louis Hospital in Owo, and the Federal Medical Centre (FMC), also in Owo, we have 38 bodies.”