Oh No! One Dead, Shops Burnt As Tanker Crashes Into UNIJOS Hospital


It was gathered that the victim said to be the tanker driver was burnt to death while trying to escape when the vehicle which crashed into the University of Jos Veterinary Teaching Hospital in front of the Polo Roundabout caught fire after spilling its content. 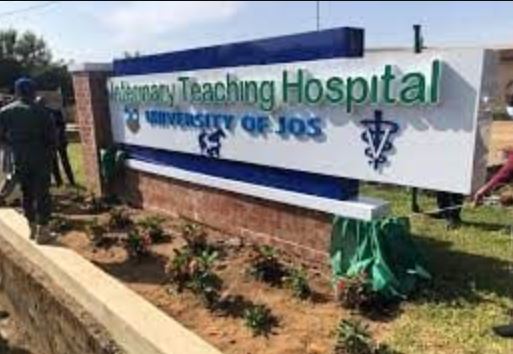 In what will come across as a really heartbreaking development, one person was burnt to death in the early morning of Thursday as a petrol tanker crashed at the popular Polo roundabout in the Gada Biu area of Jos, the Plateau State capital, The PUNCH reports.

It was gathered that the victim said to be the tanker driver was burnt to death while trying to escape when the vehicle which crashed into the University of Jos Veterinary Teaching Hospital in front of the Polo Roundabout caught fire after spilling its content.

The fire also burnt several buildings including shops in the area.

When our correspondent visited the place around 8:am on Thursday, many residents who gathered at the scene were seen bemoaning the accident at the polo roundabouts said to have been a regular occurrence in the past years.

A resident of Gada Biu, Julius Nyam, who witnessed the latest crash told The PUNCH that many people also sustained injuries during the accident and had been taken to the nearby Bingham University Teaching hospital

Nyam said “It was around 12:30 am today (Thursday) that we heard a loud noise at the polo roundabout. When we came out, we saw a petrol tanker on fire after crashing at the University of Jos Veterinary hospital buildings beside the roundabout. All the structures and shops in the area also caught fire because the petrol tanker spilled its content.

“One person was burnt beyond recognition and several buildings were also razed down by the fire. This is not the first time similar accident is occuring in this place and I think Government needs to look into it and do something because the rate is just too much.”

The Sector Commander of the Federal Road Safety Corps in the state, Mr Alphonsus Godwin, also confirmed that one person died during the accident.

Godwin said, “When we got information about the incident, we immediately deployed our men to the area. Yes, we lost one person in the crash. He was probably the driver trying to escape after the tanker caught fire but unfortunately was burnt and he died. Some structures located within the area were also burnt.”

The Sector Commander who described the accident as unfortunate warned motorists particularly tanker drivers to always exercise caution and obey traffic regulations while plying the roads .

“The accident was rather unfortunate because on several occasions, we have warned motorists plying the road leading to the Polo roadabouts to be extra careful while using the road because of its sloppy nature. .

“Just recently, several road bumps were erected along the road as part of measures to curb accidents including road signs. I think it is in the best interest of the people to observe these regulations so as to avoid unnecessary loss of lives and destruction of properties along the road in the city centre.”