Two British Soldiers, One Moroccan Sentenced to Death By Russia For Joining Ukrainian Army To Fight In The War (Photo)


They were captured in April while fighting for Ukrainian forces against Russian invaders in Mariupol. 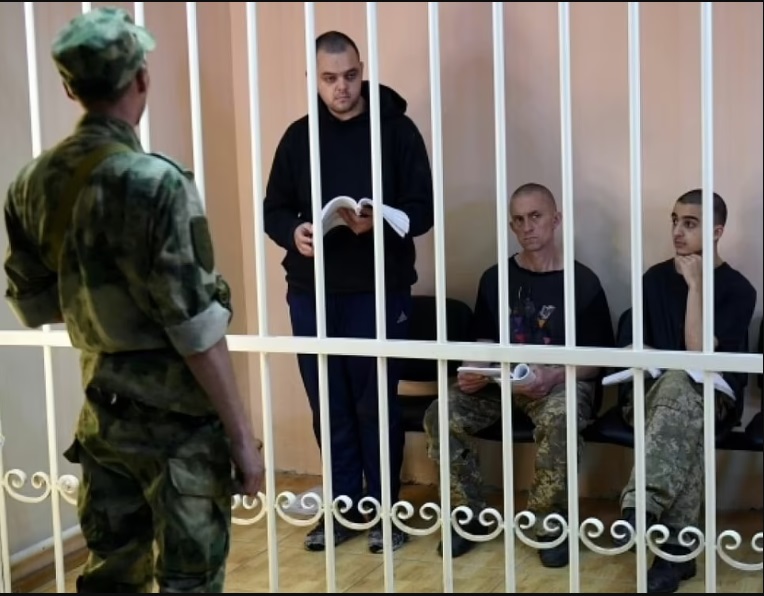 Two British fighters and a Moroccan have been sentenced to death.
The trio were handed the sentence for joining the Ukrainian army in the fight against invading Russian troops in Ukraine.
They were sentenced to death by a Russian proxy court.
The pair, Aiden Aslin, 28, and Shaun Pinner, 48, were in the dock alongside a Moroccan man, Saaudun Brahim, in the supreme court of the self-declared People’s Republic of Donetsk.
They were captured in April while fighting for Ukrainian forces against Russian invaders in Mariupol.
The British men and Moroccan national Brahim Saadoun who reportedly had been a student studying in Kyiv, before he was also detained in April, were accused by Russia and Kremlin-backed Donetsk separatists of being “mercenaries” and charged with “terrorism”.
All three defendants were forced to ‘plead guilty to the charges in front of TV cameras yesterday.
The defendants are the “first foreign mercenaries convicted in the Donetsk People’s Republic,” the Donetsk news agency claimed.
Judge Alexander Nikulin said the verdict “was guided not only by the prescribed norms and rules, but also by the most important, unshakable principle of justice”.
Speaking from behind bars, Mr Aslin said: “I was hoping the sentence would be a lot fairer judging the circumstances in which I helped the investigation and also because I surrendered to the Donetsk People’s Republic. I wish it could be different but God will be the one that will judge me when the time comes.”
Reacting to the sentence, A Number 10 spokesperson said: ‘We are obviously deeply concerned by this.
‘We have said continually that prisoners of war shouldn’t be exploited for political purposes.
‘You will know that under the Geneva Convention prisoners of war are entitled to combatant immunity and they should not be prosecuted for participation in hostilities.
‘So we will continue to work with the Ukrainian authorities to try to secure the release of any British nationals who were serving in the Ukrainian armed forces and who are being held as prisoners of war.’
Top Stories