How A Nigerian Fraudster Landed In Jail For Defrauding American Woman Of $1,000


He was arraigned on Tuesday by the Economic and Financial Crimes Commission before Justice M.A. Madugu of the FCT High Court in Bwari, Abuja. 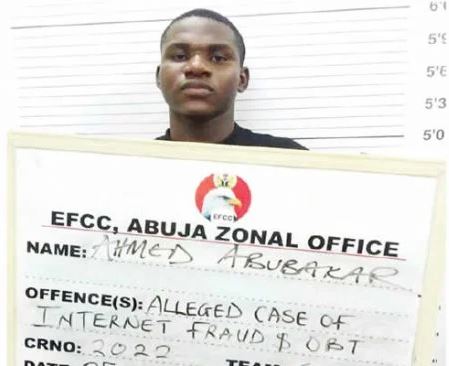 Ahmed Abubakar, a fraudster, has been sentenced to one-year imprisonment for defrauding an American woman of $1,000.

He was arraigned on Tuesday by the Economic and Financial Crimes Commission before Justice M.A. Madugu of the FCT High Court in Bwari, Abuja.

Abubakar, who was arraigned on one count of impersonation, had pretended to be one Andrew Clinton to defraud the American, identified as Mary Kae.

The charge read, “That you, Ahmed Abubakar, sometime in 2022 at Abuja, within the jurisdiction of this honourable court, cheated one Mary Kae, an American citizen, of the sum of $1000 only, by pretending to be Andrew Clinton, a moderator, thereby committing an offence contrary to Section 321 and punishable under Section 322 of the Penal Code Act, Laws of the Federation, 2004.”

The defendant pleaded guilty to the charge, prompting the prosecuting counsel to ask the court to convict him accordingly.

Justice Madugu convicted and sentenced him to one-year imprisonment without a fine option.

The convict also forfeited the sum of N250,000 and an iPhone 13 to the Federal Government.