My Bishop Forced Me To Apologise To Peter Obi In 2018, It Was Under Duress, Not Done Willingly – Father Mbaka


However, Mbaka eventually apologised to Obi in a video that went viral, claiming that he never meant to ridicule the personality of the former governor of Anambra State. 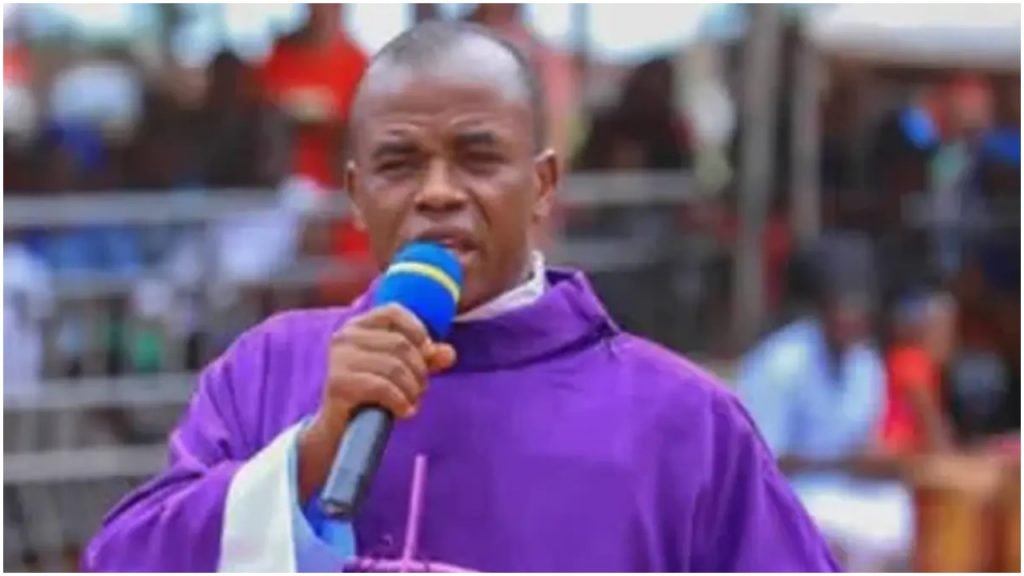 Rev. Fr. Ejike Mbaka, the popular controversial Catholic priest and spiritual director of the Adoration Ministry, Enugu, Nigeria (AMEN), has said that his apologies over his derogatory comments against the former governor of Anambra State, Peter Obi, prior to the 2019 general elections was done “under duress”.

Obi, then Atiku Abubakar’s presidential running mate had visited Mbaka’s Adoration ministry but failed to donate money to the ministry, making the priest to make some derogatory statements against him and his then Peoples Democratic Party (PDP).

He had declared that because of Obi’s action, the party would lose the presidential election. Atiku and Obi eventually lost to the ruling All Progressives Congress’ candidates, President Muhammadu Buhari and Vice President Yemi Osinbajo.

However, Mbaka eventually apologised to Obi in a video that went viral, claiming that he never meant to ridicule the personality of the former governor of Anambra State.

But in one of his recent ministrations where he spoke mostly in Igbo language, Mbaka said that against the popular belief that he willingly apologised to Obi, he only obeyed his bishop who forced him to do so.

The cleric who said that his apologies were a poisonous curse against Obi described him as “A stingy man that cannot give people his money,” saying that those supporting his presidential ambition for the 2023 elections are wasting their money because he can never become Nigerian president.

He said, “I should not have talked but I saw my video going around everywhere as if Fr. Mbaka wholeheartedly came out and apologised. No, I didn’t apologise wholeheartedly, it was out of duress. I had to obey my Bishop, in obedience I had to, it is not of my volition. I did it because I am a Catholic Priest, my Bishop said, do it, my own is ‘Yes my Lord.’”

Mbaka added that "If he is wise, he should have come here after that apology to say he is sorry but he waited. Anybody supporting him is wasting his money, he is going nowhere.”

Recounting how he helped Obi when he was the governor, Mbaka said,

“He is my friend. When he was chased out of Government House, he knew the role I played to bring him back, but how did he pay me back?

“Night meetings we attended to bring him back, ask him, ask Eselu Uga, ask Archbishop Anikwenwa, they know where and how we did it. I placed my hands on my Bible and he was brought back.

“Ask Peter since then what he used to reward Adoration. If you like Peter Obi, tell him to come and ask for forgiveness. Let him come and redo what he did. There is an altar of God he blasphemed; he defiled an altar of God, the Holy Spirit.”