The deconstruction which will be deployed through global standard controlled measures, is expected to last for 90 days depending on weather situation. 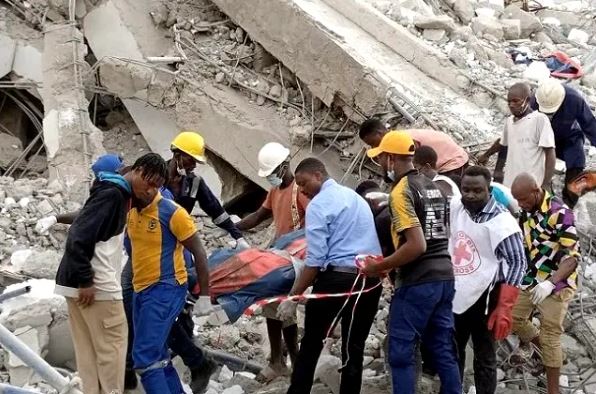 The Government of Lagos State on Thursday began the process for deconstruction of the skyscrapers and other structures within the complex of the 21storey building on 42 Gerrard Road, Ikoyi, which collapsed on November 1, 2021, according to Vanguard.

The deconstruction which will be deployed through global standard controlled measures, is expected to last for 90 days depending on weather situation.

Recall that the 21-storey building located on 42 Gerrard Road, Ikoyi, Lagos, collapsed on November 1, 2021, killing 44 people including the owner of the structure and Managing Director,

Commissioner for Information and Strategy, Gbenga Omotoso, in company of his counterparts in the Ministries of Special Duties and intergovernmental relations, Tayo Bamgbose-Martins, as well as Physical Planning and Urban Development, Dr. Idris Salako, disclosed this at a media briefing to herald the exercise as well as the handing over of the project to the consultant.

Omotoso, said the briefing was to get the media and public informed on the deconstruction of the buildings in fulfillment of the recommendations of the panel set up to probe the incident which discovered that the building failed integrity test.

The commissioner promised that any action taken on the safety project would be in the interest of public as  stakeholders meeting had previously been held in this regard as the government had completed the handing over of the complex to the contractor.

Also speaking at the event where a  minute silence was observed in honour of those who lost their lives in unfortunate incident, Salako said the land would be taken over by the state government in line with the Lagos State Physical Planning law.

He added that the site would be taken over by the state government in line with the state physical planning law which stipulated that owners of collapsed buildings would forfeit the land to the state.

According to him, though the state government has not taken a decision on what it would use the land for, but whenever it wants to put it to use, it is likely to be used for something that will help to remember those who died in the building.

Salako stated that the demolition would be done having the interest of the public including the residents at heart.

Lewo, said the deconstruction would take about 90 days but might be extended due to weather condition and that the safety of residents and workers had been put in to consideration as a control method would be used to take down the structure apart.

“We will not demolish the building, but deconstruct it using a controlled method by cutting it in pieces till it gets to ground zero level,”  he stated.