Thousands of cattle are brought to the market, which functions every Sunday throughout the year. 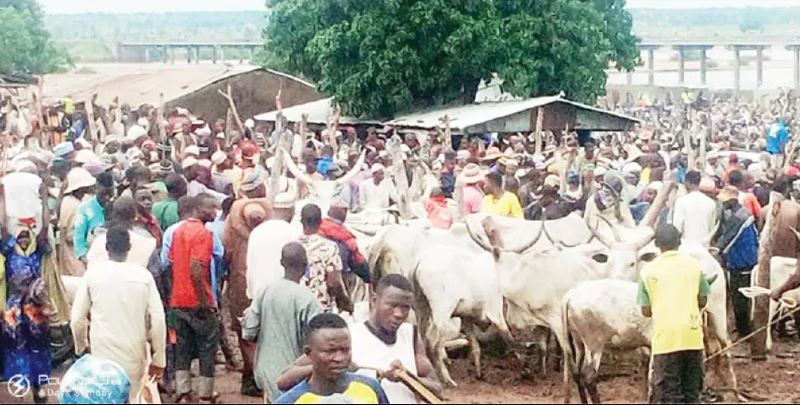 According to a report by Daily Trust, Tella is a leading market in Taraba State where more than 3,000 cattle are sold every market day. The market is located by River Taraba in Tella town of Gassol Local Government Area.

Findings by Daily Trust on Sunday show that the market has an economic importance to the entire community and serving as a major source of revenue to both Taraba State and Gassol Local Government.

Thousands of cattle are brought to the market, which functions every Sunday throughout the year.

Apart from hundreds of cattle breeders and herdsmen, merchants from different parts of the country also conduct their business in the market.

Daily Trust on Sunday’s visits to the market revealed that it starts functioning from Friday through Saturday, even before the main market day, which is Sunday.

The chairman of the market, Julde Aboki, told our correspondent that Tella attracted hundreds of merchants across the state and even beyond.

He said it was because of the high number of cattle brought to the market that buyers and sellers come in their numbers.

Aboki said the market operated all year round and buyers made choices, depending on their financial capabilities.

He disclosed that more than 3,000 cattle were sold in the market on a weekly basis.

He also said that, apart from Fulani herdsmen, other ethnic groups or business-oriented people are into cattle business.

Aboki further said that many people, including youths, earned a living in the market from the activities of buyers and sellers.

He said some people, mostly youths, worked as loaders. Also, there are drivers who go to villages to transport the cattle to the market and those that take the animals to different parts of the country, especially the East.

He disclosed that taxes are collected per cow that brought for sale or bought.

According to him, looking at the number of cattle sold in the market, the Taraba State Government and Gassol Local Government are making huge money.

Speaking on the challenges of the market, he disclosed that despite the revenue being generated by the government, it has no basic infrastructure, such as veterinary clinic, stalls, fencing and banking facility.

He said that during the rainy season, all businesses would be conducted inside the rain because of the absence of any building.

Aboki further said security was also needed around the market so that traders and their valuables would be protected.

He bemoaned the incessant attacks on cattle merchants by the Indigenous People of Biafra (IPOB) in the South East, especially Anambra State. He said some of the cattle merchants were attacked and killed while others were injured and their money forcefully taken away.

He said there were many instances where trucks that conveyed cattle to that part of the country were burnt with animals inside them.

Aboki said such incidents were rampant in recent times and nothing had been done to protect the lives of traders.

He also said many Igbo merchants used to come to purchase cattle in Tella market and places in the state and nobody would attack them.

“Igbo traders are always coming to buy cattle and conduct their businesses without provocation or attack, but when it comes to northerners, it is different,” he said.

He said many people from the North were discouraged from going for business in the eastern part of the country and both the federal government and northern states governments were not doing anything about the situation.

A cattle merchant, Adamu Buba Chukka, told Daily Trust on Sunday that he had been in the business of buying and selling cattle for many years, and it is profitable.

He said he and other young northerners started the business in a small way, but today, they are leading merchants.

Chukka explained that he would be combining cattle fattening, breeding, buying and selling because all the three yield profit.

He said prices of cattle had gone up in recent times, which made those in the business to have good money.

“A cow sold at N100,000 few years ago now sells three times that amount. And the cost of transporting the animals to any part of the country has also increased,” he said.