The young and very hard working woman talks about her experience on the job in this interview. 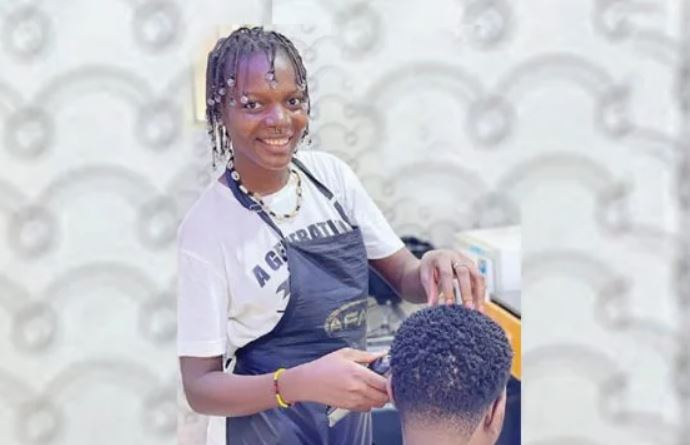 Precious Joseph, a Lagos-based female barber, speaks to OPEYEMI ADEFEMI about her experience on the job

My name is Precious Joseph. I am 27 years old. I am an orphan but I have four older brothers. I became orphaned in 2004 at age nine.

Did you go to school?

My education stopped after secondary school. There was no means to further.

Why did you choose to become a barber, a job commonly known with males?

It actually started like a joke. Back then, anytime I was with my friends at a barbershop l would boast to them about how I could handle the clipper better. At the time, I knew nothing about hairstyling.

Later on, I came across a female barber on Instagram. I was fascinated by her and used to watch her videos. I followed her closely on social media. I even turned on a notification for her posts. I was usually thrilled by the way she handled the clippers and leaves a clean shave on her customers. That was how I picked interest in the job. I also wanted to impress my friends who had doubted that I could become a good barber.

Do you mean you learnt hairstyling on the Internet?

Well, I actually had to learn it properly by becoming an apprentice under a barber. By August this year, it would be six years since I have been in this business. The beginning was really rough. Shortly after I started as an apprentice, I had to pull out to work, so I could earn money to support myself. As we all know, apprentices only learn from their bosses; they don’t earn. So, I had difficulty taking care of myself. Though I got support from my siblings, it was not enough as they have their own responsibilities too. So, I suspended the apprenticeship to go and make some money. At various times, I worked as a cleaner, front desk person, supervisor and so on before I was able to return to learning. In 2016 my boss relocated abroad, so I had to go work as a barber under someone else. I worked at two or three barbershops before I started mine.

Did you have the support of your brothers to become a barber?

In the beginning, they felt I wasn’t serious because I am a girl. They wondered why I wanted to learn hairstyling of all the available vocations. They suggested fashion designing, catering, photography and the like but I told them hairstyling was my interest. While growing up, I always boasted that I would become a soldier and my brothers had kicked fiercely against it.  I had taken the form and I was at the screening. When my name appeared on the list and I broke the news to my brothers, they seized my bags and prevented me from going. They are my parents, so I had to drop the ambition of being a soldier. But I stuck to being a barber. I currently live with one of my brothers and he is the one who turns up for me the most. He has been taking care of me for years.  He did not take me seriously until the morning of the day I resumed learning. But he has since been supportive and he even bought my first clippers.

What has the experience been for you being a female barber?

When I tell people I am a barber, they think it’s easier for me because I am a lady. To be honest, reverse is the case. It doesn’t work that way at all. When I was working for someone, before I set up my own barbershop, it was always very challenging being the only lady in the midst of guys at the salon. Usually we were being paid based on how many customers we serviced. As a lady, it was hard convincing customers that I could give them neat haircuts. Only a few customers were willing to give me a try. But the thing is, the customers I attended to always came back and would insist that I should be the one to cut their hair. They also referred their friends to me. I derive happiness in being able to satisfy my customers.

What has the experience been working on your own?

Entrepreneurship is not easy at all. I am trying my best. I am pushing. Having my own babershop is a dream come true for me. I believe that in few years, I will be bigger than this.