The bodies of many of the victims were discovered by police lying on tables, slumped over chairs and sprawled on the floor of the club in the early hours of Sunday morning. 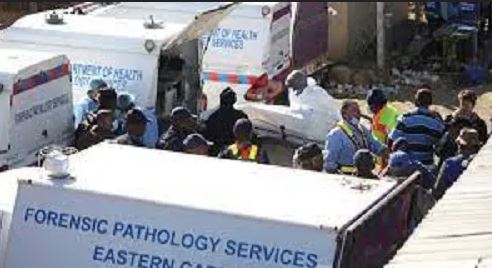 There was palpable tension as 21 teenagers were found dead at a South African nightclub.

South African authorities are now seeking answers after 21 underage teenagers reportedly celebrating the end of school exams died in a mysterious incident at a nightclub.

The bodies of many of the victims, the youngest just 13, were discovered by police lying on tables, slumped over chairs and sprawled on the floor of the club in the early hours of Sunday morning.

Police spokeswoman Col. Athlenda Mathe said the investigation into the deaths at the Enyobeni Tavern in the city of East London in Eastern Cape province was ongoing and no cause of the deaths had yet been established.

But Police Minister Bheki Cele said forensic samples taken from the victims were being sent to a toxicology laboratory in Cape Town, indicating that police were investigating whether the victims had ingested a poison or toxin. Cele said the toxicology tests might take “a lot of time.”

Provincial safety official, Unathi Binqose told the Daily Maverick newspaper that the victims may have ingested a toxic substance through alcohol they were drinking or through hookah pipes, which were being smoked at the party.