They were paraded alongside one other, who was said to be a serial kidnapper in the state. 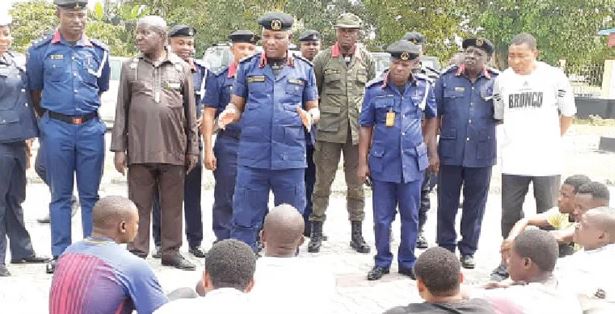 The Nigeria Security and Civil Defence Corps, Gombe State Command have arrested three persons for vandalising the property of the Nigerian Railway Corporation.

They were paraded alongside one other, who was said to be a serial kidnapper in the state.

Speaking on Tuesday during a media briefing at the command, Commandant Waziri Goni said the items being vandalized included railway slippers, nuts, and bolts.

According to him, his men tacked the vandals based on intelligence report, adding that the community support aided his corps’ due diligence.

“We got intelligence report on their activities, we gave our numbers for the community to contact us in case they have anyone who intends to sell railway slippers.”

He revealed that the investigation was ongoing towards unraveling their buyers, and other syndicates to the heinous crime.

Also, paraded, was a 30-year-old kidnapper who had been at large. Goni revealed that his men had been on his trail till he was apprehended.

He said, “Suspect had confessed that he is part of those arraigned before the court. We will take him to court to align with the case.”