Bureau de Change players said dollars were becoming increasingly scarce and the price could get to N700 before the end of the year. 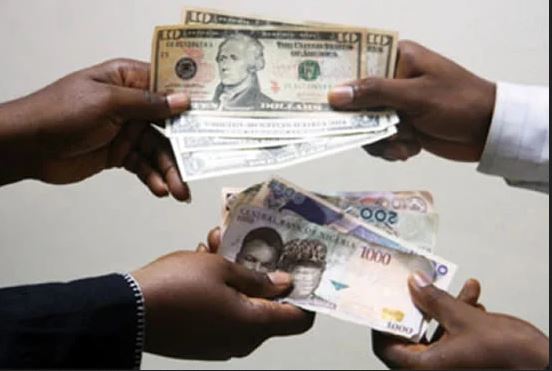 According to a report by The PUNCH, the pressure on the foreign exchange market continued on Tuesday, with the dollar exchanging at N615 at the parallel market in Lagos and Abuja.

This is even as the percentage of local raw materials sourced by Nigerian manufacturers declined to 52.4 per cent in 2021, from 57.5 per cent obtained in 2020, according to data from the Manufacturers Association of Nigeria.

The PUNCH market research showed that a dollar sold for N613 and N614 at Zone 4 in the Federal Capital Territory, Abuja, but the rate was N615 at Amuwo Odofin and Lagos airports on Tuesday.  At Abuja airports, a dollar was sold for N615. The situation was different at the Importers and Exporters window where a dollar went for N415.64, putting the margin between the official and the parallel markets at N199.36.

Bureau de Change players said dollars were becoming increasingly scarce and the price could get to N700 before the end of the year.

“We are looking for dollars to buy, but we can’t find it anywhere. People are hoarding their dollars and waiting for prices to rise further,” Aminu Bala, one of the BDCs in Zone 4, Abuja, said in pidgin English.

Abdullahi Isah, a BDC at Amuwo-Odofin in Lagos, lamented that they bought at N610-N612, saying that scarcity of dollars was hurting their business and the economy.

According to the President, Association of Bureaux de Change Operators of Nigeria, Alhaji Aminu Gwadabe, no sensible person would like to sell his or her dollar when prices could rise within the shortest possible time.

Gwadabe noted that the naira was facing a war of attrition, worsened by currency substitution, speculation, politics and exclusion of BDCs from the FX market.

He said due to the one-month notice given to travellers who needed basic allowances, many of them were finding their way to the parallel market, putting further pressure on the market.

Gwadabe called for the reinstatement of BDCs to the FX market, stressing the need for market liberalisation.

Nigeria is facing a dollar crunch, coupled with declining government revenue and oil production. Revenue of the Federal Government has declined from N970.57 billion in July 2021 to N680.783 billion in May 2022.

Manufacturers are also in the mix, scrambling for dollars to import inputs, spare parts and machinery.

According to the Manufacturers Association of Nigeria, the decline of local input sourcing from 57.5 per cent to 52.4 per cent was attributed to the scarcity of raw materials.

“Since the full opening of the economy following the lockdown associated with COVID-19 pandemic, local raw materials and other manufacturing inputs have been relatively scarce and costly. This has also affected the output of the sector negatively,” MAN said.

Professor of Ceramics Engineering, Patrick Oaikhinan, explained that his experience in ceramics-related raw materials showed that Nigeria was still far from developing its raw materials.

“The major reason companies are sourcing raw materials from abroad is the absence of details about chemical and mineralogical compositions of raw materials. Firms are also unaware of the physical and mechanical properties and areas of applications in various industries of these raw materials,” he said.

“We do not know the extent of the deposits, much less the chemical and mineralogical compositions of our raw materials. We do not have the laboratory to characterise the raw materials. If you do not know these compositions, you cannot formulate the products. If you are using trial and error, you cannot get the desired quality. Many local industries do not have the laboratories to characterise the raw materials before use because it is expensive,” he explained.

He called for a policy to develop the local raw materials and make them more marketable.

The Chief Executive Officer of the Centre for the Promotion of Private Enterprise, who interacted with manufacturers while he was the director-general of the Lagos Chamber of Commerce and Industry, said it was high time Nigeria addressed the issue of its core industries.

“Iron and steel is number one. Look at how much investment we have made in Ajaokuta Complex. The whole vision was to have an iron and steel sector that will support industralisation. The country wanted to get flat sheets, spare parts, iron rods, among others, from Ajaokuta, but we didn’t make any headway. The second major one is petrochemicals. Look at the packaging industry. Almost 90 per cent of packaging products are plastics.  Next is Aluminium Smelter Company of Nigeria. It was a gas-based industry and the vision then was to use it to support cable and wire industries, but again we made a complete mess of it.”

He said Nigeria must fix these industries urgently before talking about industrialisation of any kind.