The suspects were arrested near a gold mining site at Agbede village in Moro local government area of the state with a locally made pistol, rifle and other dangerous weapons. 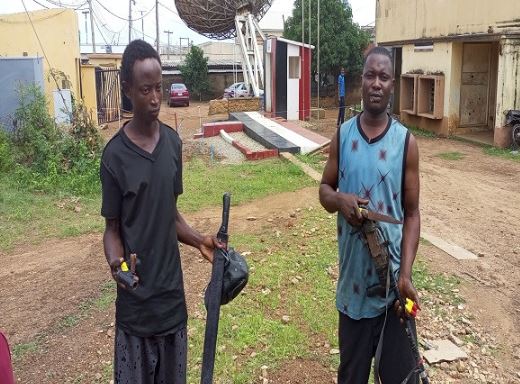 Two suspects caught with firearms have been arrested by the Nigeria Security and Civil Defence Corps (NSCDC) Kwara State Command.

Public Relations Officer (PRO) of the Command, Olasunkanmi Ayeni, who disclosed this in a statement on Thursday, June 30, said that the suspects were arrested near a gold mining site at Agbede village in Moro local government area of the state with a locally made pistol, rifle and other dangerous weapons.

"We are all aware of the security situation and banditry around us. This command has been working so much not to allow these bandits to infiltrate our state," Ayeni stated.

"Alhaji was trying to get a cartridge for the local pistol he said he had bought for N8,000 and fortunately for Nigerians, he asked question from the wrong person. From this process, we were able to trail him, leading to his arrest

"It was the the arrest of Alhaji that led to that of John, who he said sold the local pistol to him. On getting to John’s place, the officers in the intelligence unit were able to get this rifle from him and other dangerous weapons

"We know that no one has the right to own a local pistol or local riffle. The highest is the one which is licensed by Nigeria Police. Keeping this with them, one should understand what they may be using it for. We implore members of the public to always furnish us with useful and timely information so that we can all live in peace and secure environment."

Speaking with journalists, Alhaji, claimed that he bought the gun to defend himself in his cattle business.

Ihenka, who confirmed that he sold the locally made pistol to Alhaji claimed that he is a security guard in a gold mining company.

"They already know that I’m using it (gun) in the company and they said this gun is not good for security I should go and drop it. I then dropped it. I had a leg pain problem. I sold the local pistol to treat myself. I took permission from the company that I’m going to plant on my farm," he said.

"I bought chemicals for the farm from where I was called and asked if I was the one who sold the local pistol to the suspect and I said yes. The company know that I have the gun. I’m not a kidnapper. I’m a security man in a gold mining company

"The reason why the suspect said I should sell the pistol to him is that he has a cow and he is sleeping in the bush. That is why I sold it to him. I made a mistake in selling the gun to him. I don’t have more guns to sell."