The duo were arraigned on Wednesday, June 29, on a one count charge of conspiracy and criminal breach of trust. 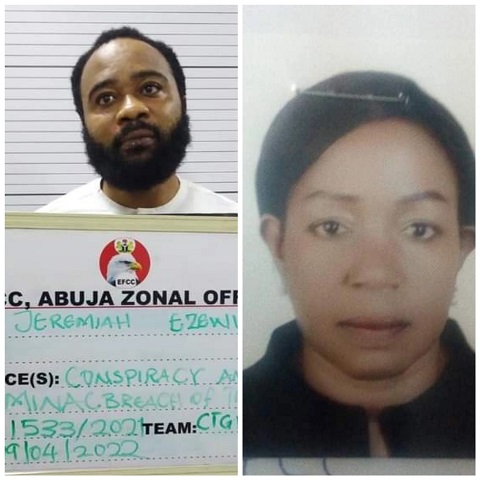 The Economic and Financial Crimes Commission (EFCC) has arrested and arraigned a couple for alleged scam.
Jeremiah Ezewulu and Nkem Irene Ezewulu were arraigned before Justice M.A Madugu of the Federal Capital Territory High Court, Bwari.
The duo were arraigned on Wednesday, June 29, on a one count charge of conspiracy and criminal breach of trust.
The charge reads, “that you, Jeremiah Ezewulu and Nkem Irene Ezewulu sometime in 2020 in Abuja within the jurisdiction of the High Court of the Federal Capital Territory dishonestly misappropriated the sum of Two Million, Five Hundred and Fifty-five Thousand Naira (N2,550,000) only, being the sum of money entrusted to you by one Emanuel Akaka through your Access Bank account number 0083701444 as payment for the purchase of an American Toyota Rav4 and you thereby committed an offence contrary to Section 311 of the Penal Code Act, Laws of the Federation (Abuja), 1990 and punishable under Section 312 of the same Law”.
They pleaded not guilty to the charge.
Justice Madugu granted the Ezewulus bail in the sum of N1, 000,000 (One Million Naira) each and two sureties each in like sum.
The case was adjourned till October 18, 2022 for commencement of trial.
Top Stories