The invaders were said to have used dynamites to destroy the heavily fortified facility, including the Central Terrorism Unit (CTU), freeing most of the terrorists there. 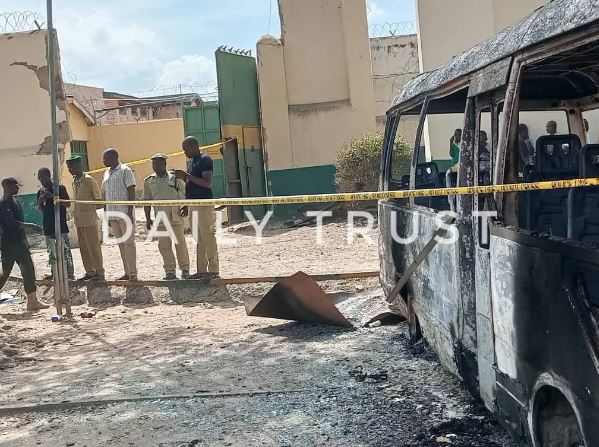 Palpable fear has gripped the many residents of the Federal Capital Territory (FCT) following the horrific attack on the Kuje Correctional Centre.

The prison facility was attacked by a large number of terrorists last night.

The invaders were said to have used dynamites to destroy the heavily fortified facility, including the Central Terrorism Unit (CTU), freeing most of the terrorists there.

The facility, Daily Trust learnt, had over 1,000 inmates at the time of the attack.

Some of the residents, who spoke with Daily Trust Wednesday morning, described it as unfortunate.

Mr. Dayo Ahmadu, a resident of Lugbe, a town in the nation’s capital, wondered why such would happen at a prison in Abuja where all the security architectures are housed.

‘’This is sad. How will the ordinary residents be safe in this kind of situation? We are just at the mercy of God. This is definitely not good for the image of the country,’’ he said.

Another resident, Amina Mohammed, advised the relevant authorities to immediately begin search for the escapees.

‘’Much needs to be done on our security. We are just not safe if this is happening in the nation’s capital, now I can feel what the people in Borno, Niger, Zamfara and Kaduna states are experiencing,’’ he said.

Mr. James Achibo, a Kuje resident, asked the federal government and the FCT Administration to live up to expectations in the area of security.

‘’Divinity will intervene on our behalf but government should wake up to their responsibility. Governance is not about shutting down business places and demolishing illegal structures alone,’’ he said.