It also said that the Islamic terrorists had declared war against Christians in Nigeria, saying that was why they attacked the Kuje Correctional Centre and released some of their fighters to sustain the attack. 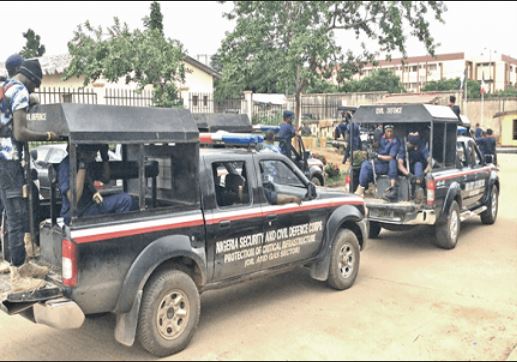 Nigerian paramilitary institution, the Nigeria Security and Civil Defence Corps (NSCDC) has raised a fresh alarm on the activities of terrorists.

The NSCDC raised the alarm over planned attacks by the Islamic State in West Africa Province (ISWAP) terrorists on selected targets in the Federal Capital Territory, Abuja.

It also said that the Islamic terrorists had declared war against Christians in Nigeria, saying that was why they attacked the Kuje Correctional Centre and released some of their fighters to sustain the attack.

NSCDC disclosed this in letter with Ref: No; NSCDC/CMDT/FCT/INT/VOL.X/188 addressed to the Permanent Secretary, Federal Capital Territory Administration and was by FCT Commandant, Peter Maigari.

The letter obtained by Leadership which SaharaReporters sighted on Sunday, was dated July 8, 2022, and titled: "Security Alert: Renewed Threat Of Attack By ISWAP Terrorist On Targets within The FCT".

The letter reads, "Certified intelligence reveals that members of the decimated terrorist group Islamic State in West Africa Province (ISWAP) have concluded plans to launch more coordinated and spontaneous attacks on selected targets within the federal Capital Territory (FCT) and had declared war against Christians in Nigeria.

"The foregoing is to enable them hibernate in targeted communities (FCT) and re-strategize for further terrorist activities, especially on soft targets to keep the agenda of the group alive to the public.

"Comment: Taking into consideration the recent terrorist attack on Kuje medium security custodial centre for good two hours without any security resistance indicated their readiness to carry out more coordinated attacks in selected cities/towns, security formations, schools, and worship centres in FCT, hence the released of their members for more formidable squad to achieved their dastardly act.

"Recommendation: Against this backdrop, it is advised that counter measures be emplaced, and there is need to review existing security measures around such targets and other sensitive facilities with security formations, in FCT to frustrate the planned attack.

"This report is submitted for your information and necessary action sir."