Nigerian actor, Yomi Fabiyi has taken a swipe at his colleague, Mo Bimpe after she explained what transpired between them.

During a question and answer session on Instagram on Wednesday, Mo Bimpe cleared the air on the s3x-for-role allegation against Yomi.

She noted that the actor did not ask her for s3x in exchange for movie roles.

Replying to a fan’s question, the 28-year-old added that the actor asked for a relationship after their movie shoot.

“Is it true you and Yomi dey fight because of s3x for role?” The fan asked.

“No! Infact he didn’t ask me out until we finished his movie I featured in. (Though he said If he knew I was going to turn him down he would have done that before shooting the movie). We don’t relate because he insisted on either dating me or becoming enemies and I had to choose,” Bimpe replied.

However, in an Instagram post on Thursday, Yomi dropped a cryptic message, saying, “It is safe to say some people will want to DESTROY the ladder they use in climbing to the top by all means possible and a handful will still indulge such. Nothing is as efficacious as Natural Justice. I hate half truth. Game on.” 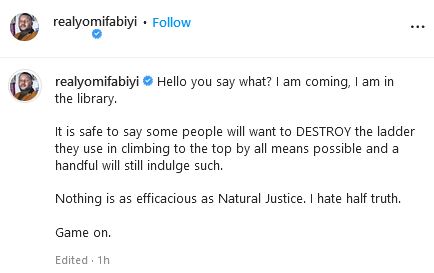 Yomi and Bimpe made headlines last year after the actress alleged that Fabiyi stopped casting her in movies because she refused to give in to his s3xual advances.