Soldiers, policemen and members of the Nigeria Security and Civil Defence Corps (NSCDC) have been sighted in strategic locations around the state capital and border towns. 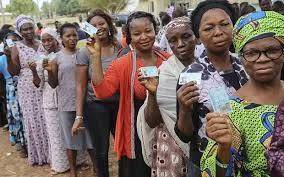 Osun State is agog as people line up in their numbers to cast their votes.

Across Osun State today, up to 1,955,657 registered voters are expected to exercise their franchise across the 3,763 polling units to elect a new governor for the state in a keen contest.

Meanwhile, some of the voters have vowed to collect greedy politicians’ money and still stick to for their candidates.

Soldiers, policemen and members of the Nigeria Security and Civil Defence Corps (NSCDC) have been sighted in strategic locations around the state capital and border towns.

The election, which will be contested by 15 political parties, is expected to be a straight duel between the incumbent governor, Gboyega Oyetola of the All Progressives Congress (APC) and Senator Ademola Adeleke of the Peoples Democratic Party (PDP).

Other candidates in the race are the former Deputy Speaker of the House of Representatives, Lasun Yusuf of the Labour Party, Goke Omigbodun of the Social Democratic Party (SDP) and Akin Ogunbiyi of Accord Party.

Meanwhile, residents who spoke with Daily Trust said their choice would not be influenced by money and other forms of inducement.

A resident, Kunle Ogundele said, “People will troop out for the election despite the security issue. We can see the police patrolling our roads and the sky to assure residents of maximum protection.

“People are ready to cast their votes despite the issue of vote buying. We will collect money from the opponents and still vote for our candidates of choice.”

Another resident, Demola Ahmed said, “As it is now, everything is settled and people are expected to come out en masse, especially with the heavy presence and constant patrol of the town by security agents.

“On the issue of vote buying or money politics, Osun will vote for who they really want and collect money from wherever they get it from. But the election is going to be decided more on party and personality. We are tired of suffering and want to vote for who we love and believe can meet our expectations.”

A trader in Osogbo, Folashade Bello, said the people already knew who they would vote for despite any inducement from politicians.

Mrs Grace Oguntuyi also said, “Security or no security, we will come out and vote for the right candidate. We need peace and progress in this state.”

More voters are expected to participate in the election than the 2018 poll when 767,444 electorates out of the 1,668,524 registered voters exercised their franchise. The election recorded 45.99 per cent turnout.

In 2018, the Independent National Electoral Commission (INEC) declared Oyetola as winner, having polled 255,505 votes against Adeleke, who had 255,023 votes at the end of a supplementary election, which held in seven polling units across four local governments amidst allegations of harassment and other forms of malpractice.

The INEC had scheduled the rerun after declaring the main election inconclusive, won by Adeleke with 353 votes after polling 254,698 against Oyetola’s 254,345. It stated that the margin of votes between Adeleke and Oyetola was less than the number of cancelled votes in seven polling units.