End Of The Road: Man Who Specializes In Stealing TV Sets From Hotels Finally Lands In Police Net (Photo)


It was gathered that the suspect would book rooms in hotels and when it is time to check out, he would steal the television set in the hotel rooms. 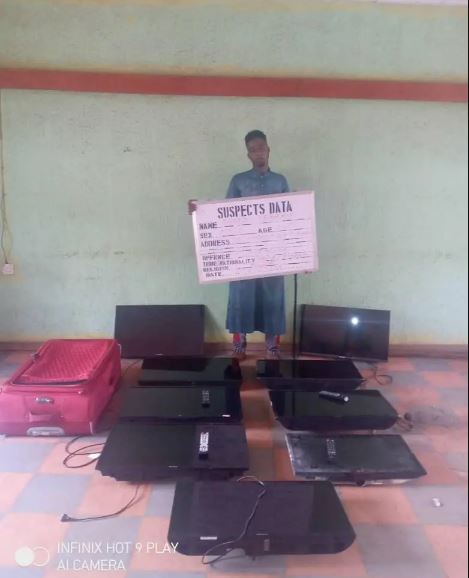 Ahmed Ibrahim, a Nigerian man, who specialises in stealing television sets from hotels in Edo state has been arrested by operatives of the Edo State Police Command.

It was gathered that the suspect would book rooms in hotels and when it is time to check out, he would steal the television set in the hotel rooms.

Moreso, it was learnt that the suspect had robbed two other hotels of their television sets. He was arrested with the stolen goods while attempting to travel with them to Abuja for sales.

The Edo State Command’s spokesperson, SP Chidi Nwanbuzor, said the suspect was arrested on July 14, for burglary and stealing.

He said the Command received a complaint from, Mr Adekunle Olalekun, the manager of Mindcast Hotel, Ekpoma, Edo State, on July 13, that Ibrahim, 24, booked three rooms in the hotel.

“Shortly after booking the rooms, Ibrahim left the hotel unnoticed with his luggage that he came in with, unknown to them, three television sets in the three rooms he booked were what the suspect packaged in his luggage when checking out.”

The PPRO said through discreet investigation and intelligence gathering, the suspect was traced to a Hausa cattle market in Ekpoma where he was arrested.

Nwanbuzor said during his arrest, it was discovered that the suspect had neatly packed the plasma television sets in readiness to take them to Abuja for sale.

He assured that the suspect will soon be arraigned in court.