The consultant noted that Osinbajo decided to undergo the surgery because he had confidence in Nigerian doctors. 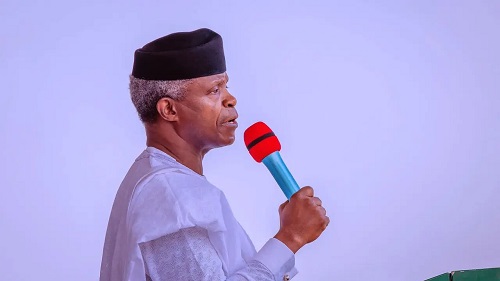 The Presidency has revealed why Vice President, Yemi Osinbajo opted to undergo surgery at Nigerian Hospital in Nigeria instead of flying abroad as does President Muhammadu Buhari all the time.
A consultant who operated on Osinbajo also gave insight on why the VP decided to have the surgery in the country.
The consultant said Osinbajo decided to use a Nigerian hospital because of his confidence in Nigerian doctors.
Recall that Osinbajo, on Saturday, successfully underwent a surgical procedure on his right femur (thigh bone) at the Duchess International Hospital, Ikeja, Lagos.
A senior officer in the Presidency who pleaded anonymity told Punch that some of the government and private practice doctors of the Vice President suggested he travels out of the country as this is “often usually considered by such a class of patients and at times the option could also seem more seamless.”
However, he insisted on using a Nigerian hospital and medical experts.
“The VP’s view is that most people don’t even know the facilities exist here. Besides, we have some of the best doctors available anywhere,” the official stated.
Sharing his thought’s on the VP’s decision, the founder of the Reddington Hospital who is also one of the doctors who coordinated the surgery, Dr Yemi Onabowale, said “the VP was clear that he had confidence in Nigerian doctors both at home and abroad and would prefer they handle the operation.”
After the surgery late Saturday, the hospital management revealed that Osinbajo would be discharged within the next few days.
Top Stories