It is reported that several teams are keeping an eye on the Argentinean jewel and are negotiating with him. 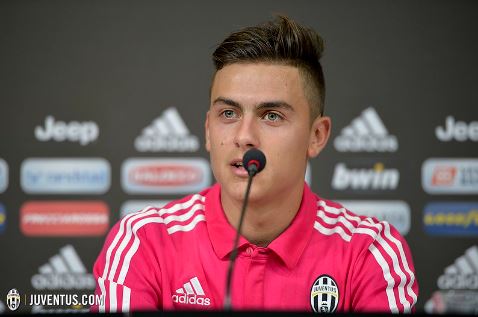 Paulo Dybala in a press conference Source: https://flic.kr/p/SegSGD
Argentinian Paulo Dybala ended a seven-year career at Juventus. He said goodbye with an emotional letter when he was unable to sign a renewal deal and was released. Obviously, many teams want him in their ranks because of the quality he has.
It is reported that several teams are keeping an eye on the Argentinean jewel and are negotiating with him. So far there has not been any agreement because the salary of the Argentine is very high, and the suitors do not want to spend so much money on a player.
Wherever team Dybala goes, he will give them a lot of strength in attack and make them contenders for the championships this season. That's why going to Bookmaker Ratings is a good idea to bet on whichever team gets the Argentinian, or whichever is your favourite. There you will find the highest odds and the best places to do it.
These are the different options for the Argentinian striker.
Inter
The Nerazzurri is the most advanced team in the race for Dybala. There is talk that there is already an agreement with him, but nothing has been made official, so his signing is still up in the air. The idea was to bring him together with Lautaro Martinez and Joaquin Correa to have a fearsome South American attack. Paulo is interested in staying in Italy because it is a league he knows and Inter could match the salary he was asking for at Juventus.
But the arrival of Belgian Romelu Lukaku changed the whole scenario, as the Milanese forward line is very saturated, and they are no longer so sure of incorporating the Argentine. Alexis Sanchez, Edin Dzeko, Lautaro, and the Belgian striker are part of the Inter forward line, so there is no room for Dybala.
Then there is the issue of Financial Fair Play. The high salaries of Inter's strikers make the signing of the Argentinian striker very complicated. Unless someone leaves the Milan squad will continue the offensive for Dybala, if not, it looks very tricky.
Roma
José Mourinho's team wants to return to the top of Serie A and win the Europa League. That is why the Portuguese coach contacted Dybala to offer him to be the spearhead of his project, as he believes that he could shine in his system and with his quality he could become a Roman symbol.
La Lupa legend Francesco Totti himself said in an interview that he would meet with the striker to convince him to join the team. The main problem is that the team led by The Special One does not play Champions League, and that does not appeal to Dybala, who wants to compete at the top level.
On the salary issue, at first, the Italian capital team could not cover the striker's salary, but it has been reported in some media that such is the desperation of Paulo, that he would lower his salary to 6 million per year to be able to reach any of the teams that want him.
This would put Roma in range to sign him, but in the end, the decision is up to the Argentinian, who does not see Roma as the best option.
AC Milan
The reigning Calcio champions are looking to strengthen, and they know that Dybala offers plenty of quality and goals for their Scudetto defence. The local press reports that the Rossoneri are very interested in the Argentinian, but that he is not their top priority.
The striker, as we said, prefers to stay in Italy, and he likes being in Milan. They play in the European Cup and have a team that can put him in contention for more trophies. The talks between the two are still in the beginning stages, as there is only one interest.
Milan has other priorities and if they were to make the signings they need, Dybala would be in a bad position as he would no longer be necessary for the team.
Monza
Newly promoted Monza have earmarked the striker to be the symbol and star of their Serie A comeback. Silvio Berlusconi is the owner and knows perfectly well the Italian Calcio, he knows that Dybala can be someone important in the team and wants his new adventure in football to be perfect.
In terms of wages, there would be no problem as the club would make an effort to pay the striker's wages, and the president would build a team around the Rosarino. The problem for the striker is that it is a project that is just starting, they do not compete in Europe, and six months before the World Cup he would not like to start a new adventure that could jeopardise his participation in Qatar.
Monza is the least likely, but in the transfer market, anything can happen.
Atlético Madrid
Away from Italy, one of the destinations is in the Spanish capital with Atlético Madrid. Cholo Simeone wants him in his team's forward line because he believes that together with Joao Felix and Angel Correa he can make a good partnership.
Besides, the low level of Antoine Griezmann puts Dybala in a good position in the team. The main problem for him to come to Spain is that he himself would not want to leave Italy and Atlético would ask him for a significant salary reduction, which he does not want to sacrifice.
The problem now is time. The season is about to start, and many teams are already doing pre-season. Dybala needs to have a team to get into rhythm and be at 100% for Argentina, who are favourites to win the World Cup.
The player is making all possible sacrifices to play in a good team, but for one thing or another everything ends up collapsing at the last minute. Where will the Argentine play?
Top Stories