Shettima: You Have Registered For God’s Judgement – Christian Leaders To APC, ‘Hired Bishops’


Ahiakwo said the action portrayed the political atmosphere as ludicrous, adding that they were attempting to reduce the Christian faith to ridicule. 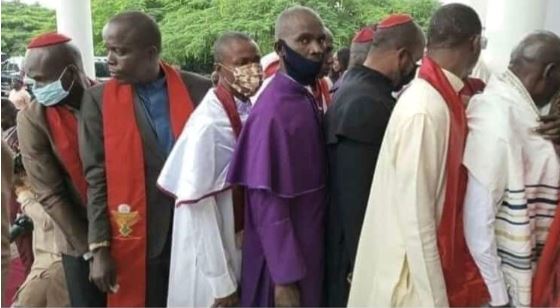 Justice Osai Ahiakwo, a renowned lawyer and diplomat, has reacted to the presence of 'bishops' at the unveiling of APC Vice Presidential candidate.

The diplomat condemned yesterday’s allegation that the national ruling party, All Progressives Congress, APC, hired some persons who adorned themselves in different cassocks of Christian leaders to grace the unveiling of Alhaji Kashim Shettima, former governor of Borno State, as Bola Ahmed’s presidential running mate.

Ahiakwo said the action portrayed the political atmosphere as ludicrous, adding that they were attempting to reduce the Christian faith to ridicule.

He said the persons were not Christian leaders but impostors, stressing that both the sponsors and the hired ones would face God’s wrath.

Also, two top clergymen, including the Bishop of Anglican Communion, Calabar Diocese, Professor Nneoyi Egbe, as well as the General Secretary of Brotherhood of the Cross and Star College of Bishops, Archbishop Mike Ntuk expressed shock and utter disappointment over the development.

Ntuk said, “It is indeed a very sad development. It shows absolute disregard for God. It is extremely embarrassing.

“Why did they not chose to embarrass Muslim leaders by hiring Imams in their regalia to such event? It shows the depth some political leaders can descend in the course of their desperation for power. It really is a shame the quality of leadership and deceit we are throwing up. Unfortunately, God is a Nigerian and He’ll meet them when they least expect and pull away the carpet from under their feet..”

On his part, the Anglican Communion Bishop said, “They have registered themselves for God’s judgement. Except they, including those that hired them confess and repent, they are facing condemnation.”