The reason is obvious, the health centre in Obeleagu Umana can be best be called ‘Squalor’ should it require a new name. 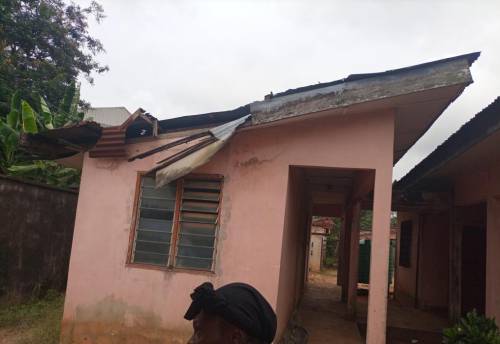 The story has been told of Mrs. Dorathy Onyia, a 39-year-old mother of three who also happens to be a native of Obeleagu Umana in the Ezeagu local government area of Enugu State.

According to SaharaReporters, Onyia, who is eight months pregnant, is afraid to deliver her baby in the Community Health Centre located in the centre of the town for fear of losing her baby or even her life or both. Though she lives less than five poles away from the health facility, she prefers to travel more than 30 kilometres to access healthcare.

The reason is obvious, the health centre in Obeleagu Umana can be best be called ‘Squalor’ should it require a new name.

Narrating the horrible experiences of women who recently had their babies in the facility, Onyia said “save for the mercy of God, Mrs Juliet Okeke would have lost her baby after successful delivery when a part of the roof collapsed on her while still in labour bed”.

“She was lucky that her baby had been taken to the baby bed otherwise I don’t know what would have happened,” she said.

“If the health centre is in good condition, our women would be here. If you look at the structure, does it look like a hospital? If you go inside, you will see that rats and mice have taken over the place and that is why our pregnant women who can afford the cost of child delivery outside are running away.

“No one wants to deliver her baby here because anything can happen. Last time, another friend of mine nearly lost her baby when the ceiling fell on the delivery bed.

“I wouldn’t say blankly that all the women in the community have resolved to be going outside the community, but you can imagine those who are coming here.”

Mrs Onyia disclosed that there is a Cottage Hospital built by a military administration within the community which is under the supervision of the Enugu State Hospital Management Board, but regretted its health workers do not come to work.

She said doctors stopped coming there after a medical doctor from the community who worked in the hospital retired a few years ago.

When SaharaReporters visited Obeleagu Umana on Friday, it was observed that the L-shaped hall serving as the health centre has its roof on one side blown off. The side that is covered leaks when it rains.

The two-bed centre has one private room, probably an office where drugs are kept. A part of the block has caved in, and apart from being dilapidated, the facility is completely surrounded by bush. 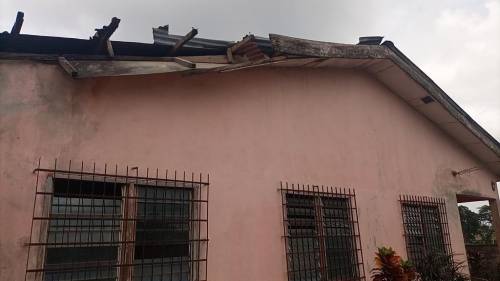 Pregnant women and indeed people of Obeleagu Umana suffer because of a lack of quality healthcare.

Now pregnant women have to go to Udi or Enugu town to deliver their babies, a resident of the community who gave her name as Mrs Cecilia Ozonne, told our correspondent.

“If the government rebuilds the health centre, it will be good for our women and children,” she said.

In a video of the centre that is trending in the state, a voice narrating the despicable state of the facility likens the hospital to a rat house.

“It is not even fit to be a parking store. The entire community is above this health centre but I don't know who to hold responsible for it, is it the government or the community? Whoever is willing to help us should help us because the hospital is an eyesore.

“There was a day when we delivered a new baby, we were here when one of the ceilings fell down. My luck that day was that I laid the baby in its bed. If not, it would have collapsed on the child,” he said.

Another resident of the community who spoke on condition of anonymity told our correspondent that the hospital began operations in 2009 after the traditional ruler of the community reconstructed the building which was said to have existed for years.

According to the source, it began operations when one Mr Abugu was the Head of the Department of Health in the local government area. He is now retired/

“He visited this community during the course of interaction. He promised to approve a health centre for the community if we provided a structure. So, with excitement, the traditional ruler reconstructed the building because it had been in existence and after that Mr Abugu approved it, according to his promise.”

On why the community is not patronising the cottage hospital, the source said, “People are complaining of lack of doctors and that is why nobody goes there.

“Doctors posted to the hospital don't come to work and any day they come, they won't spend up to one hour there before they leave; you won’t see them again until after one month or two. When you come and you don't see a doctor, what do you do, you look for where you will get treated.

“It is because there is no doctor and often no staff that people still come to the health centre otherwise it would have since been forgotten. Nobody will see a trap and go enter it.

“Here, the government doesn’t supervise the activities of health workers. Most health workers sent her don’t stay, they always complained of this structures that one day it will collapse.”

Meanwhile, at the Cottage Hospital, SaharaReporters discovered that it was constructed by the state government under the administration of Dr Chimaroke Nnamani in 2000. The Cottage Hospital was inaugurated by former President Olusegun Obasanjo on June 23, 2000.

During the visit, SaharaReporters saw only a gardener/caretaker. No health worker was available, which confirms what the residents had said.

When SaharaReporters called the state health commissioner, Dr Ikechukwu Obi about the state of the health centres and the plight of the residents of the community, he said, "Just go and confirm those things because my own confirmation is that it is not quite true what people are saying.

“You can go and confirm yourself before any other thing."