Oyetola, who spoke at a meeting held at Osun Government House, Oke Fia, Osogbo, and attended by many political appointees and party leaders, also said the loss was a test from God. 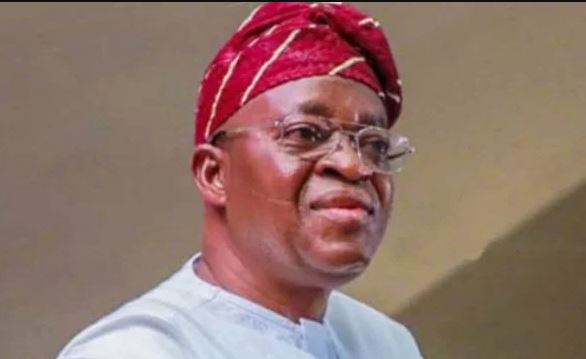 Adegboyega Oyetola, the Osun State Governor, has talked about his defeat at the recenlty coluded polls.

The governor, on Friday, said the defeat suffered by the All Progressives Congress at the July 16 governorship election was a temporary setback.

Oyetola, who spoke at a meeting held at Osun Government House, Oke Fia, Osogbo, and attended by many political appointees and party leaders, also said the loss was a test from God.

He then charged party members to return to their various wards and continue regular party activities, stressing that the defeat must not distract them from the bigger project ahead.

He said, “Rumours have been spreading around that I have run away after the election result was announced. We also heard the PDP saying I am trying to convert government assets to mine. Don’t worry about them, they are simply playing to the gallery.

“I summoned all of you here to assure you that the present situation is just a temporary setback. It is a test of our resolve by God and we will continue to stand by him. Ours is God’s project and we shall not despair.

“Go back to your various units and wards across the state and continue with regular party activities, hold your meetings regularly. We have bigger projects ahead and we must not allow this temporary set back distract us.”

He further said security operatives have been instructed to maintain law and order, harping on the need to remain peaceful.

“Some persons have been going around disrupting peoples’ daily activities. Do not be disturbed. I have instructed security operatives in the state to maintain law and order. We must continue to remain a peaceful state, nobody is allowed to misbehave,” he concluded.