The suspect had been on the wanted list of the agency after receiving several reports that he has been terrorising the Tombia/Etegwe axis of Yenagoa. 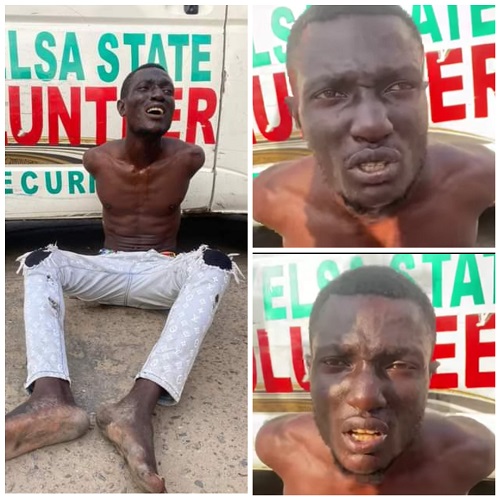 A notorious criminal and a suspected cultist has been apprehended in Bayelsa state.
Godsent Oruouna Brian who hails from Amassoma community in Southern Ijaw Local Government Area of the State was arrested by operatives of the Bayelsa State Volunteers Security Outfit.
The suspect had been on the wanted list of the agency after receiving several reports that he has been terrorising the Tombia/Etegwe axis of Yenagoa.
He was arrested by members of the special squad, a unit under the Volunteers at around 5pm on Tuesday, August 2, 2022. An IPhone 6s was discovered and returned to the owner.
The suspect in a confessional statement to the Media Unit of the State owned security outfit, confirmed to be a member of the Bobos cult group and leader of the gang.
He has been handed over to Operation Doo Akpo unit of Nigeria Police Force, Bayelsa State Command for further investigation and prosecution.
Reacting to the development, Chairman of the Bayelsa State Volunteers, Chief Oyinkuro Lucky Asanakpo, reassured residents of the area that his men are still working round the clock to ensure other criminal elements terrorizing the area be brought to book.
Top Stories