Buhari Should Have Been Impeached 7 Years Ago — Kachikwu Blows Hot


According to Kachikwu, Buhari’s impeachable offences did not start now, adding that it began since his inception in office. 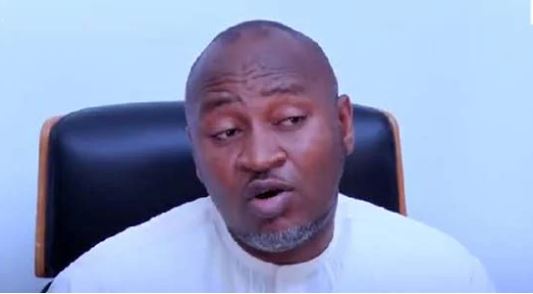 Dumebi Kachikwu, the Presidential candidate of the African Democratic Congress, ADC, has supported the calls to impeach Nigeria's number one man.

Kachikwu said President Muhammadu Buhari ought to have been impeached seven years ago, saying that the National Assembly should impeach its leaders before Buhari.

Kachikwu stated this in Abuja when he paid a condolence visit to Senator Patricia Akwashiki on the death of her mother who aged 95, in his company were the party Chairman, Chief Ralph Okey Nwosu and Board of Trustees members.

According to Kachikwu, Buhari’s impeachable offences did not start now, adding that it began since his inception in office.

“If they are doing it now, it means they have made Nigerians suffer for nothing, thousands dead, tens of thousands displaced, the economy has collapsed, our streets flow with the blood of the innocent, our borders are porous for terrorists.

“Our farms are no longer existent, we now sell human organs as one of our main businesses in Nigeria, kidnapping is on the rise. There’s no area you can say this President has done well. Whatever impeachable offence we are talking about now has existed for the last couple of years, why today, it’s self-serving.”

He urged the National Assembly to impeach its leaders before Buhari, alleging that they were complicit in his stay in office.

His words, “Before they impeach the President, they ought to impeach the leadership of the National Assembly, who are complicit in the failures of the President. Government is shared responsibilities.

“They ought to impeach them so that we know those people who supported him to stay this long, and they ought to leave. So that we have a new era of leadership who can usher us into the next level.”

Fielding questions from journalists about his plan for the aged in the country, he explained that his government if elected, would set up social support structures.

He said, “Obviously the aged, weak, young, women, poor people, are a segmented part of society that are always under-supported. My plan is to create social support structures for these people. Our government is a government that will pride itself on making Nigeria work for everyone. On that level they will be taken care of.

“But as a people, as Nigerians we need to start reaching and preaching love and tolerance and help that can lift these people up. When you look at recession, this segment of society are the ones who feel it the most. Government needs to start putting up support structures, my government will definitely thrive on that.

“As a society we don’t even have old people’s homes, which should be a private sector driven enterprise, but where the private sector is lacking government needs to also step up to give a direction so that the private sector can then follow. If we put things like this in place they would do better in society.

“When we look at our field pension schemes in Nigeria, a lot of these people give all their years to service and eventually their pensions are stolen. We hear cases of people queuing outside government offices and after a while you hear that some of them have died, never receiving their pension.

“These are all horror stories we hear from people suffering from failed government policies, we need to address the situation. Nigerians cannot act as if they are not part of us, they are our parents, we need to support them.”