In a statement on Wednesday, a group noted that Tinubu had refused to condemn the ‘obituary’ column written by one, Sam Omatseye, published on Monday. 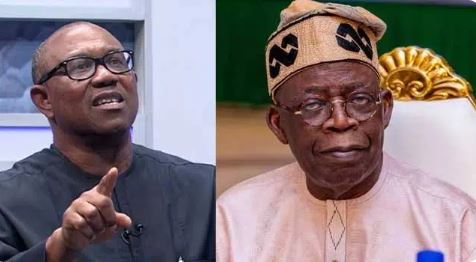 Bola Tinubu has been called out for remaining silent after a journalist used his Newspaper (TheNation) to publish offensive article against Peter Obi, the presidential candidate of Labour Party.
According to the Peter Obi Support Network (POSN), the All Progressive Congress (APC) presidential candidate is wishing Obi dead.
In a statement on Wednesday, the group noted that Tinubu had refused to condemn the ‘obituary’ column written by one, Sam Omatseye, published on Monday.
The statement which was signed by the Deputy Director of Communications, POSN, Mr Adegbite Adekunle, stated that the columnist had in the article wished Obi and his supporters dead.
The group said, “If Tinubu did not sanction that article, it would not have been published.
“If he did not sanction it, by now Omatseye would have been sacked or, at least, reprimanded for that satanic piece.
“For Tinubu and his camp to keep quiet on this sacrilegious write-up by one of his confidants and published by his own newspaper speaks volumes. It betrays Tinubu’s endorsement of the column which has attracted widespread condemnation, except from the Asiwaju and his camp.”
They insisted that this was the second time in barely three weeks the ruling party was praying for the death of Obi and his camp.
The statement read in part: “The APC has brought in ethnicity, religion and now death wish into the 2023 campaign. It portends grave danger.
“Ethnicity: He was the only presidential candidate who said, ‘It is my turn. It is Yorubas’ turn’. Lagos State Governor Babajide Sanwo-Olu and others accentuated it with their ethnic comments and actions.
“Religion: He was the only one who disregarded the religious plurality in his choice of running mate, thereby making religion a talking point in this campaign season.
“Repeated reference to death – He was the one who said that Labour Party supporters will labour in vain to their death. Now he has published a full-page article in his newspaper (The Nation) referring to #PeterObi as ‘OBI-TUARY’, another reference to death. In that same article, he also engaged in the demonisation of the Igbos, a clear attempt to set Igbos up for hate and attacks.
“It is obvious the Tinubu’s camp is desperate and ready to fight dirty in this campaign. But this is not 2015. The people are ready to meet them squarely.”
Top Stories