Officers recovered some cartridges and bullets within two metres of the grave where the bodies were discovered. 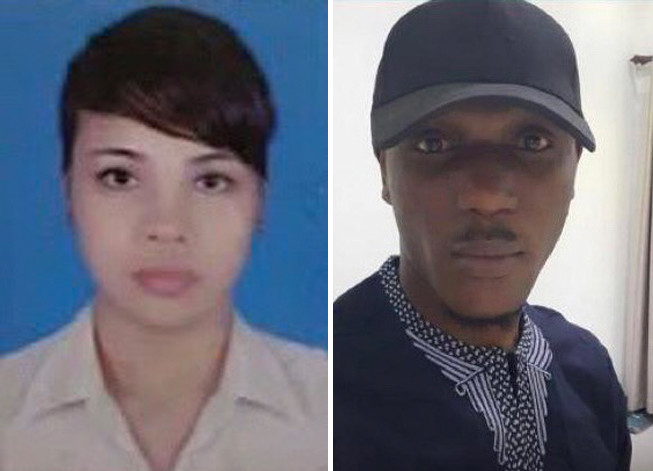 A Nigerian man and his Vietnamese woman have been killed and buried in a shallow grave in northeastern Thailand.
Police forensics investigators identified the bodies of the two victims.
A wild mushroom harvester discovered their bodies in a forest at Chok Chai district in Nakhon Ratchasima on the evening of July 28, 2022.
The man noticed a fresh pile of earth covered with branches about 500 metres off Highway 224. The village head and other residents went to check it out.
They dug into the soil and quicky stopped when they uncovered part of a human body.
Police were called to the scene and rescue workers dug deeper, uncovering the bodies of a man and a woman buried less than one metre down. The bodies were n3ked.
Village headman Thepbancha Saikrathok said the woman’s body was above the man's body in the grave, and each was mostly covered with a layer of cement.
It was initially estimated they had been dead at least three days. Local people said they did not recognise them, and there have been no reports of people missing in the general area. Police said it was likely they were murdered elsewhere and their bodies brought to the forest and hidden.
The two bodies were taken to Chok Chai Hospital for full post-mortem examination to support investigation and identification
On Thursday, August 4, Nakhon Ratchasima police said the serial number of the Vietnamese woman’s silicone breast implants and the Nigerian man’s fingerprint assisted in identifying the victims.
The police reported that the implant was sent to Vietnam. They later coordinated with the Vietnamese embassy in Bangkok to help examine the woman’s fingerprints.
There was a match between the results and that of Nguyen Thi Van, a 33-year-old Vietnamese woman.
Police also checked the man’s fingerprints with Immigration police, and the results showed that the body belonged to 38-year-old Anabon Chika Hen from Nigeria.
A forensic examination revealed that the Vietnamese woman had distinctive tattoos on her back, wrist, legs, and arms, including one with a diamond-studded crown.
Officers recovered some cartridges and bullets within two metres of the grave where the bodies were discovered.
With this information, police are investigating to determine what led to the murder of the two people.
Top Stories